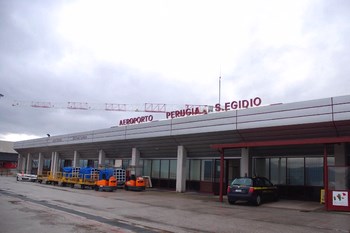 Perugia San Francesco d’Assisi – Umbria International Airport (PEG) is located 10 km east of the city center Perugia in central Italy.This is the only commercial airport in the region of Umbria.

The airport is small and efficient, and are mainly used by low cost airlines such as Ryanair, Bellair, Skybridge Airops etc. There are also a number of charter flights in the summer. Some popular destinations from Perugia Airport is Milan, London, Tirana and Brussels.

Facilities for travelers at the airport is relatively limited, but there is a shop, a newspaper stand and a bar in the terminal building. The airport is accessible for the disabled.

To get to the Perugia city center, one can take a bus or taxi. The bus ride takes about 20 min. – Depending on traffic. If you want to rent a car in Perugia, the car rental companies Avis, Hertz and Europcar offices in the terminal building at the airport.