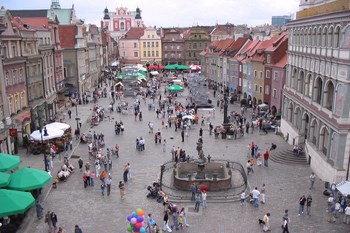 Poznań is a city of around 560,000 inhabitants (2008), located on the Warta river in central Poland – roughly halfway between Warsaw and Berlin.Poznań is one of Poland’s most important industrial cities – and it also has great importance as commercial, cultural and educational center. Here is example including the famous Adam Mickiewicz University, which has over 130,000 students.

Poznań is one of Poland’s oldest cities, and it was at the height of their power – including as the first seat – in the 1200s. The center was lying on the right bank. Eventually, a newer, German town built on the left bank – and here was the center of power in the 1500s, under the Poznan next heyday. In 1793 the city came under Prussian rule, but since 1919 has belonged to Poland. Like many other Polish cities, Poznań strongly destroyed during the 2nd World War II – but was in the early postwar years completely rebuilt.

Many of Poznan attractions are located in the Old Town. Here is the old medieval square with the town hall from the 1300s with its current facade is from the 1500s.

The old town we also Gorka Palace, a complex of buildings from the 1500s such as houses the city’s archaeological museum. By other cultural institutions, the following are mentioned: The stunning Raczynski Library from the 1800s, special museum of musical instruments, the Old Royal Palace (which now houses an art museum) and Zamek Cesarski – a palace inaugurated in 1910 for the German Emperor Wilhelm II. It currently serves as a cultural and historical museum.

Poznan’s most famous building is the impressive St. Peter and St. Paul’s Basilica, which is Poland’s oldest cathedral (begun already in the 900s).