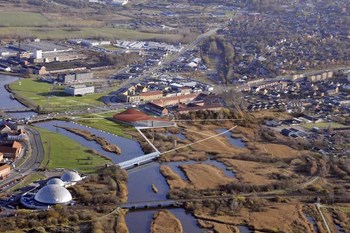 The Danish town of Randers is located in the north eastern part of Jutland – where the river empties into Gudenåen Randers Fjord.The city belongs to Region Midtjylland, and has 60,600 inhabitants (2011).

Randers was founded as early as the 1000’s, and is now a major industrial, commercial, and service city. There is good shopping in the downtown shops or shopping “Randers Great Center” – located approximately 6 miles south of downtown.

Randers has a number of tourist attractions – including Randers Art Museum with a wide collection of Danish art from the 1800s until today, Cultural Museum, Skt. Morten’s church from 1520, City Hall from 1778 in the Baroque style, and experience center “Randers Rainforest,” which is northern Europe’s largest artificial rainforest with about 350 different plant species, 175 animal species, aquarium and slangeterrarium.

A little outside of town is the sculpture park “Krakamarken” and Randers zoo.