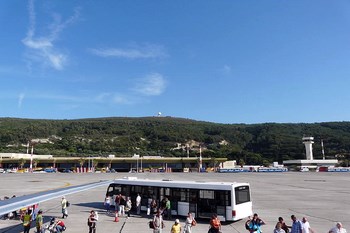 Rhodes International Airport (RHO) is located on the west coast of the Greek island of Rhodes in the Aegean – about 14 miles southwest of Rhodes city.This is the 4th busiest airport in Greece, serving about 3.6 million travelers in the year.

Rhodes Airport has great charter traffic in the summer months as well as direct routes to the Greek mainland throughout the year. Airlines Olympic Airways and Aegean Airlines flies on domestic flights, and more than 80 airlines have seasonal flights to almost all countries in Europe and the Middle East.

Rhodes Airport opened in 1977 and currently has two terminal buildings. Facilities for travelers include restaurants / cafes, shops (including duty-free shop), newspaper kiosk and ATM. There are hotels near the airport.

To get from the airport into the center of Rhodes, one can take a taxi or bus. If you want to rent a car in Rhodes, the entire 8 car hire offices at airport – including the international actors such as Avis, Hertz, Budget and Sixt.