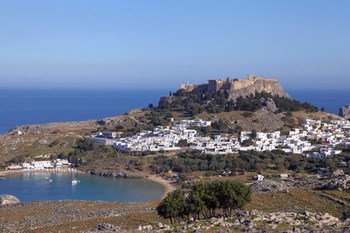 The Greek island of Rhodes is located in the Aegean Sea – 18 km southwest coast of Turkey – And is part of the Dodecanese.Rhodes is known for having great tourism in the summer, where the sun and swimming are the main attraction. In addition, a number of historical sites on the island.

Centrally located on the island is a forested limestone ridge, and the highest peak – Attavyros – measures 1215 m

Rhodes has some 130,000 inhabitants (2008), and half the island’s population lives in the city of Rhodes – the island’s capital.

Rhodes town is located on the island’s northern tip, and the old town – which is a major tourist attraction – is a UNESCO World Heritage Site. Rhodes town is also known for the former “Colossus of Rhodes” – a giant statue of the Greek sun god Helios, erected in the year 290 BCKr. Colossus was one of “the world’s seven wonders.”   Today there are two deer statues in this square.

On the east coast of Rhodes is the island’s second largest town – Lindos – which is a popular tourist destination.There are both sandy beaches, ruins from ancient archaeological sites.

Other famous tourist and seaside resorts on the island include Faliraki, Kalithea, Kolymbia, Ixia and Pefkos.