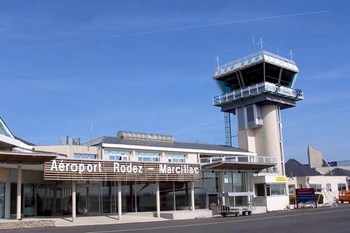 Rodez Airport is a small – but growing – international airport, which serves about 140,000 passengers a year (2010). The airlines Ryanair, Air France and Hex Air has direct flights from here to such  Paris – Orly, Lyon, Dublin and London.In 2012 it will also launch a new flight to Brussels.

The airport was opened in 1970, and first gained international flights in 2003. Rodez Airport has one terminal building, where there are facilities such as internet access, a restaurant / café / bar (open in June 2012), ATM and meeting rooms. The airport is accessible for the disabled.

There are several hotels in the area – including the 3 star “Hostellerie De Fontanges” – which is a 10 min. in time from the terminal building.

There is no public transport from the airport to the center of Rodez, but outside the terminal building has easy access to taxi. If you want to rent a car in Rodez, the car rental companies Avis, Hertz, Europcar and National offices at the airport.