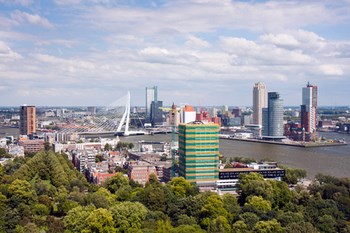 Rotterdam is located west of the Netherlands by the river Nieuwe Maas – approx. 25 km from the North Sea, and is the country’s second largest city (after Amsterdam ).The city is located in the province of Zuid-Holland. The river has a connection with the North Sea.

Rotterdam has 607,000 inhabitants, and if you include the metropolitan area, the population is increasing to almost 1.2 million (2010).Rotterdam is one of the largest and most modern ports, and is also an international trading center. The city is also an important railway junction and an important cultural center.

Rotterdam was heavily damaged during the 2nd World War and has only preserved old buildings. Of these, the Gothic church of Sint Laurenskerk from 1525 (“Grote Kerk”) and the City Hall from 1925.

Along the river niew Mass’s artificial sand beaches – which is very popular in summer.

Rotterdam has otherwise good shopping and varied nightlife. The Annual festivals and events in the city – including an international film festival and a jazz festival.

The city’s airport – Rotterdam Airport – 8 km northwest of the city.This is the Netherlands’ second largest airport.