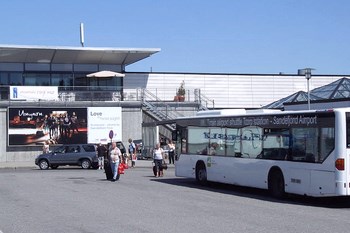 Sandefjord Airport Torp (TRF) is located 8 miles northeast of Sandefjord city and is one of the largest airports in Norway non-state-owned.It is owned and operated by the local company Airport AS (where Sandefjord and Vestfold county’s key players). The airport serves around 1.5 million passengers annually.

Sandefjord Airport has one runway, and the runway length is 2950 m Around 1.5 million passengers served annually here.

Stavanger Airport was originally a military airport, which has been open for civil aviation since 1958.However, it was only in 1997 when the Irish low cost airline Ryanair began to show interest in Torp, the trend really took off. And it is precisely Ryanair currently operates most routes here – to a dozen destinations across Europe. In addition, the airline Norwegian Air and the Hungarian company Wizz Air airport.

The public facilities are limited, but there is a small selection of shops / kiosks and a few restaurants and cafes in the terminal. Facility is otherwise free wireless internet and also has meeting rooms available for conferences.

To get from the airport to the town center, you can use the bus, train or taxi. Many also want to rent a car at the airport, and several international rental agencies are represented here – including Avis, Budget, Europcar, Hertz and Sixt.

There are no hotels at the airport, but the offer both in Sandefjord, Vestfold and the other towns are good.