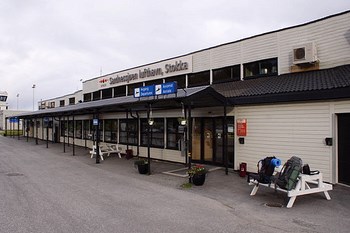 Sandnessjøen is a town and a former municipality in Nordland on external Helgeland who is also Alstahaug municipality’s administrative center. It should be 5827 (2012) residents in the city. The nearest neighboring towns to Sandnessjøen is Brønnøysund in the south, Mo i Rana in the north and Mosjøen the southwest.It is located on the island Alsten located at the mouth of Vefsnfjorden.

Food and service businesses including fabrication of offshore products are important industries in Sandnessjøen.

The city was a port of call for Hurtigruten in 1891, and it led to a boom town. One of the major attractions is the Petter Dass Museum dedicated to the poet-priest Petter Dass (1646-1707). The old parsonage from the 1700s located in the countryside, idyllic surroundings about two mil south of Sandnessjøen. A new museum building was designed by the renowned architectural firm Snøhetta. The chain of mountains, the seven sisters is just south of the city. There are marked trails up on top of mountains.

Sandnessjøen is also a good starting point for those wishing to explore Helgeland coast by bicycle. There are ferries to the islands Træna Lovund, Herøy and Vega which has beautiful archipelago. Each year World Cup crab which is a major event with market, tastings, music etc..