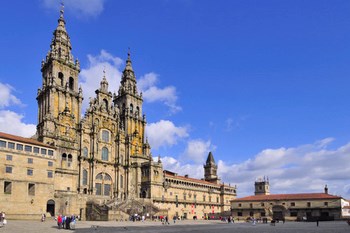 Santiago de Compostela is the capital of the northwestern Spanish region of Galicia, situated 70 km south of the port city of La Coruna.The population is approx. 95,000 (2011).

Santiago de Compostela is both a commercial and cultural center and a university (the university was founded in 1501) – but first and foremost a city of pilgrimage, which every year attracts hundreds of thousands of visitors. They come to visit the grave of the apostle James, which according to tradition is to be buried here. The city’s name – Santiago – a recall of St. James. The rest of the name Compostela (from Latin: Campus Stella, “star field”), a reference to the stars in the year 813 headed hermit Pelagus to Jacob’s remains.

The most famous attraction is the beautiful Romanesque cathedral, which was begun in the 1000’s and completed 200 years later. There are also several nice religious buildings, including several churches and monasteries – and a huge arch-bishop’s palace.

A number of travel companies across Europe organizes special pilgrimage to Santiago de Compostela, where part of the journey usually takes place on foot.

The nearest airport is Santiago Airport, located 16 km northeast of the city.