Compare prices and find cheap car hire in Seattle from well-known and local car hire companies. Insurances and unlimited mileage are included. Save up to 70% on car rental in Seattle through us. 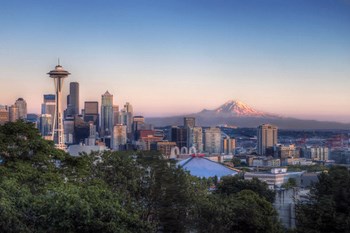 Seattle is the largest city in the northwestern United States, and is located on a relatively narrow strip of land between the Puget Strait and Lake Washington on the Pacific Ocean. The city is located in the US state of Washington – 155 km south of the border with Canada. The town itself has about 600,000 inhabitants (2010), but if you bring the whole metropolitan area, increasing the population to about. 3.3 million.

Throughout the city’s history, Seattle’s economy has been linked to the fishing industry, and still is one of america’s most important fishing ports. In addition, Seattle has a good deal of industrial activities, such as includes shipyards and aircraft production. Also, the headquarters for Microsoft is located here.

Seattle was founded in 1853, and experienced a strong resurgence by the end of the century – primarily because the city then had its own railway, and because of the great gold finds in Alaska. The town is named after the Indian chieftain Seathl, who was born in this area in the late 18th century. Seattle is also one of the American cities where many Norwegian immigrants settled. This is reflected in the “Nordic Heritage Museum“, located in the northern part of the city.

Seattle has a rich and varied cultural life, and several music genres are connected to the city. Among other things, the so-called “grunge” music originated here, which is associated with world-famous Seattle bands such as Nirvana,Pearl Jam, Soundgarden and Alice in Chains. Also, rock legend Jimi Hendrix was born in Seattle. 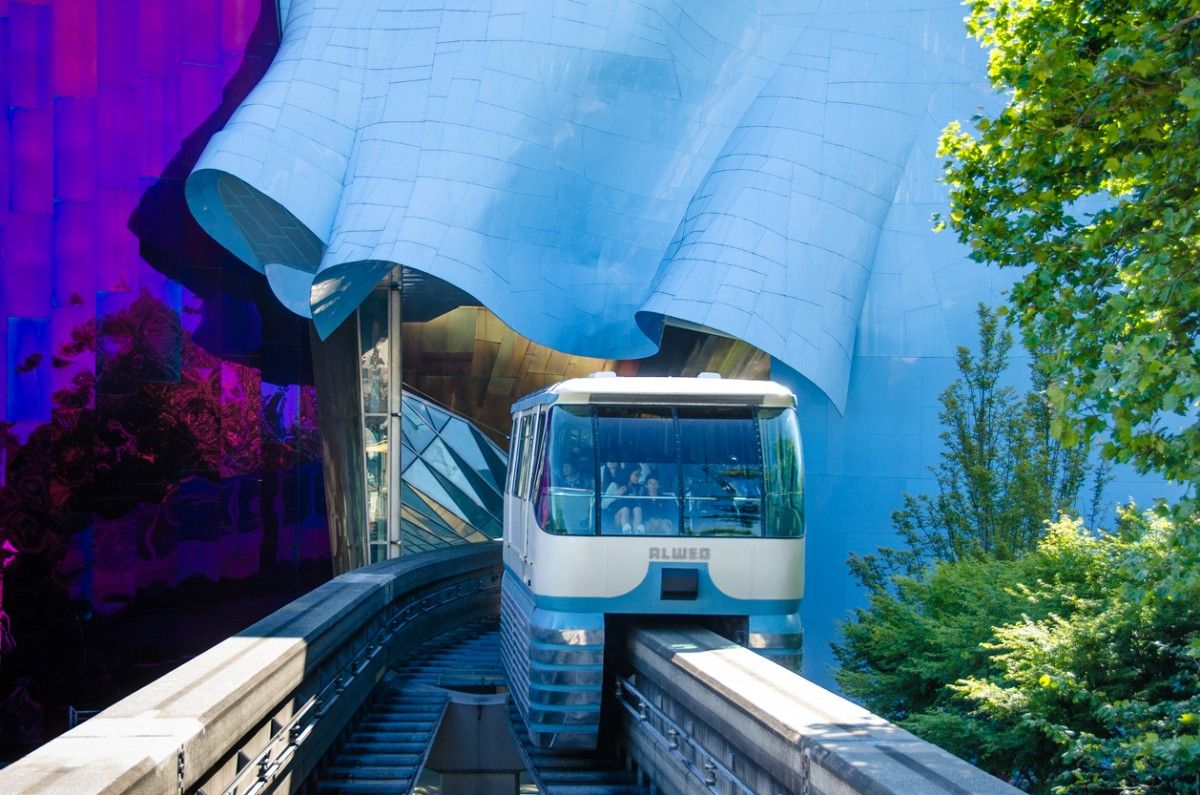 Seattle’s popular monorail track was built for the World’s Fair.

You are not far away from great nature and cozy small towns if you have a rental car in Seattle. The area also has many islands that you can easily reach by car or boat, where life by the sea is central. Inland you will find some of the most majestic mountains in the United States, surrounded by wild and beautiful forests. Here are some suggestions for driving routes, including a trip that goes to neighboring Canada. 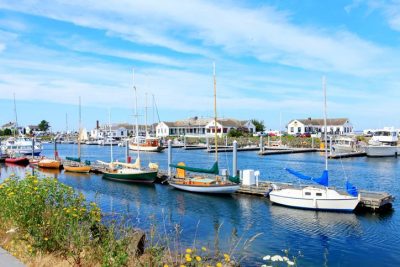 The small town of Port Townsend has a history of fishing and shipping.

Port Townsend at Washington State is located on a promontory northwest of Seattle, and right at the entrance to the strait Puget Sound. The small town has an exciting history related to fishing and shipping. In the city centre you will find many Victorian-style houses built in the 19th century. The streets are quiet and peaceful, with cozy restaurants, bars, cafes, small shops and a couple of museums worth a look. The city is an excellent starting point if you want to get some unique nature experiences when visiting this area. Right out in the fjord there is a rich wildlife, and you are almost guaranteed to see killer whales and other whale species if you take a boat ride from Port Townsend.

Mount Rainier – A walk around the volcano

Mount Rainier is the highest mountain in Washington state (4,392 meters), and also an active volcano. The volcano is not considered completely safe, partly due to its 26 glaciers. This causes any eruption to be particularly devastating. Nevertheless, the chances of an eruption happening just when you are there are relatively low (the last eruption was in 1894). However, the neighbouring mountain, Mount St. Helens, had erupted as recently as 1980.

Mount Rainier is a great sight too at a distance, and it is popular to drive around the whole mountain. Then you pass four of the entrances to the national park the mountain is located in, and have many opportunities to take a rest break. Guests also enjoy a couple of attractions. for example, the waterfalls Skookum Falls and Martha Falls. The highlight of your tour is for most people a trip to Sunrise – the highest point you reach by car. 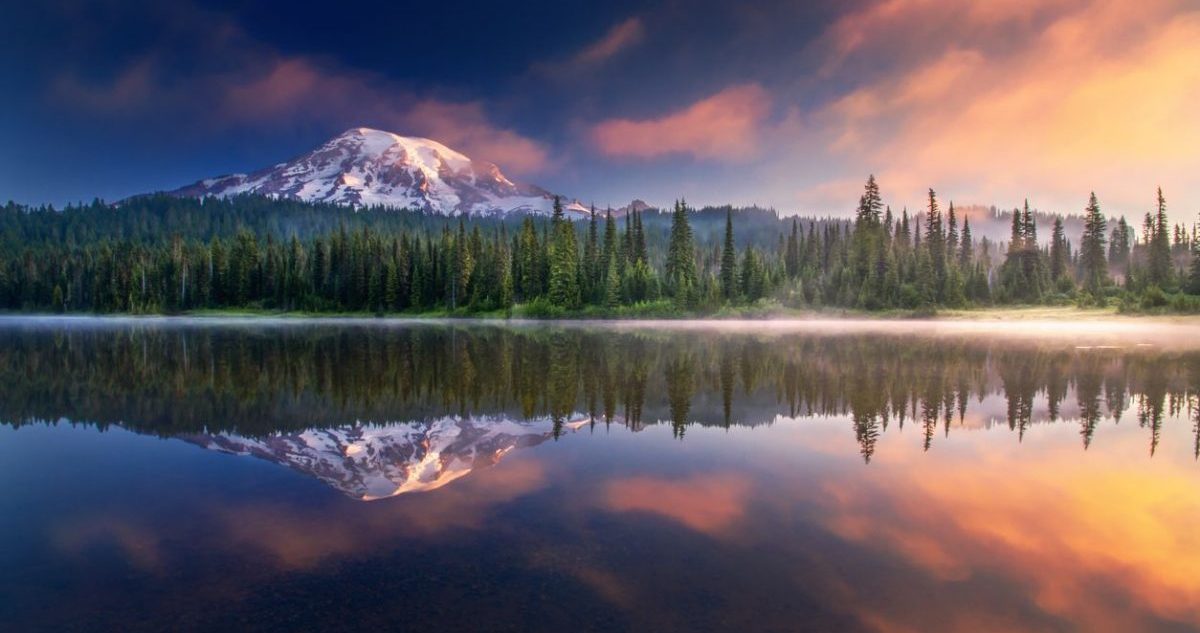 Mount Rainier is a great sight from a distance. Here you can drive around the entire mountain with the rental car.

The city of Vancouver offers both great nature experiences and metropolitan life.

Seattle is just a few hours away from the Canadian border, and right on the other side you’ll find the least equally exciting city of Vancouver. This Canadian metropolis is famous for its beautiful surroundings, with majestic mountains on one side, and the Strait of Georgia fjord on the other. The city itself is very modern, with residents who are nice and friendly. The city center holds everything you would expect from a big city, but is at the same time considered very safe. You are also not far away from great nature experiences, and need barely 30 minutes to get to great resorts,beautiful forests, and mountains that can be climbed. 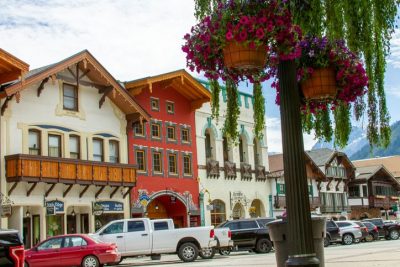 In the centre of Leavenworth are the bavarian-style houses and the small town hosts the October Festival.

Leavenworth – A Small Piece of Bavaria

This small mountain town was founded at the end of the 19th century, in connection with the construction of the railway The Great Northern Railway. It eventually became a centre of timber logging, but quickly shifted its focus to tourism. Already in the 1920s, residents understood that the place had a unique and beautiful location, which would attract visitors looking for nature experiences. This in turn has led to the fact that the houses in the city have been built in bavarian style. In Leavenworth you can therefore get the impression that you are somewhere in southern Germany, some of which are underlined by the fact that they host Oktoberfest also here. Here people go to ski dog sledding and skiing in winter, rafting and fishing in the summer, and to enjoy the mountain air. By the way, Leavenworth has one of the strangest museums in the United States. Here they have collected over 5,000 different nutcrackers, the oldest of which dates to prehistoric times. 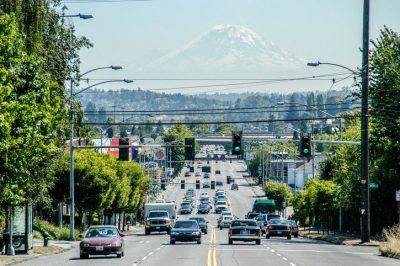 Drivers in Seattle mostly drive nicely and stop for pedestrians.

In downtown Seattle (Downtown) it is normally quite easy to find parking in the streets. You pay on vending machines that are on the sidewalks, or with an app PayByPhone (requires credit card number) on your smartphone. The local authorities also operate a number of parking garages in the city centre, where prices per hour are relatively low. In addition, there are several private parking companies with garages around the city centre.

Note that Seattle has several so-called Restricted Parking Zones. These are zones in areas that are of particular importance, such as hospitals. Parking within these zones is reserved for guests who live in the area and have their own RPZ permit to park there. A rental car can be parked in dedicated spaces withinthe zone , but then with a time limit on how long it can stand there. This is well signposted in the relevant areas.

Traffic in Seattle can be tight at certain times, but this is still one of the easiest major cities in the United States to drive in. The city’s residents have words to be friendly and helpful, which also applies when driving a car. Unlike many other places, the cars stop for pedestrians in Seattle. The vast majority follow the traffic rules, even when it comes to speed limits. 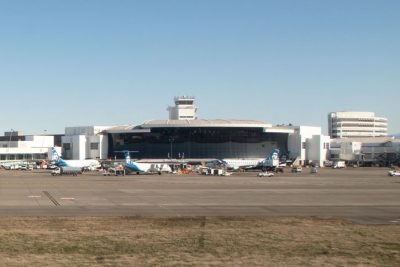 The airport serves over 50 million passengers a year.

Seattle’s main airport is Seattle-Tacoma International Airport. The name Tacoma is included because the airport is located between the capital of the state of Washington, and the port city of Tacoma. From here, there are flights to about 100 other cities in the United States, as well as about 30 international destinations in Europe, Asia and the Middle East. Seattle-Tacoma is among the largest airports in the United States (8th as of 2020), with over 50 million passengers a year. The airport has one main terminal, in addition to two smaller terminal buildings, which can handle a total of 80 aircraft at the same time.

Although Seattle-Tacoma handles a very high number of passengers, it is easy and easy to pick up or deliver car hire here. All car rental companies are located in a separate centre on the north side of the area. There you can get a shuttle bus from both the main terminal and from the two small satellites. The shuttle buses run continuously 24 hours a day, and you don’t have to get into the timetable. As of today, you get a rental car at Seattle-Tacoma from 12 different companies, including Hertz, Avis, Alamo, Thrifty, Sixt and Enterprise.