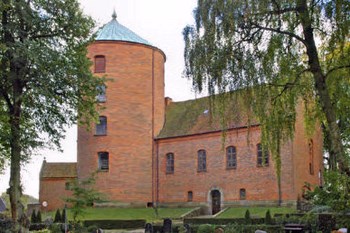 Skanderborg is a Danish town located in central Jutland – about 25 miles southwest of Aarhus. The town is located by the lake “Skanderborg Su”, and has about 14,000 inhabitants (2009). The city is also administrative center of Skanderborg Kommune, and belongs to Region Midtjylland.

Skanderborg the Municipal Court in 1583. In the southern part of the city’s main street “Adelgade” is Skanderborg oldest part of the town hall from 1860, Amtsgården from 1804 and several timber. This is also Skanderborg Museum with its local history collections.

Skanderborg grew up around the royal castle “Skanderborg Slot” which lay on a small island in Skanderborg Su. The castle was begun in 1171 but was demolished in the 1760s. Castle church with its round tower from 1562, however the site and is a major tourist attraction.