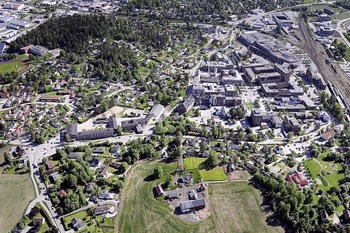 Ski is a city and municipality located in the far southwest Akershus county about 30 miles south of Oslo.The city has 13   619 (2011) inhabitants. It is one of the youngest cities which became a city in 2004. The municipality borders Oslo in the north, Oppegård / Ås in the west, Hobøl the southeast and Enebakk the east.

Ski is characterized by close to Oslo and a large part of the population commutes to the capital. Sights Skiing is Waldemarhøy built – and cultural and Ski medieval church dating from the 1100s.

Ski is what you could call a stop, and an important hub in the Oslo area. Here the Østfold railway outer and inner line.

Ski Storsenter is the first multi-center in Norway and one of the largest shopping centers with hotels, cinemas, a large variety of restaurants and shops, bowlinggall mm.

Daisy, the largest amusement parks, located 7 km northwest of Ski center. Daisy is a large amusement park, among other features eventyrsti, swimming facilities, a good selection of different rides and loops and many other attractions.

European roads E6 and E18 runs through the municipality. Ski airport is just outside the city center but is not open to general traffic.

The nearest airport is Oslo Airport Gardermoen located 70 km to the northeast of Ski.