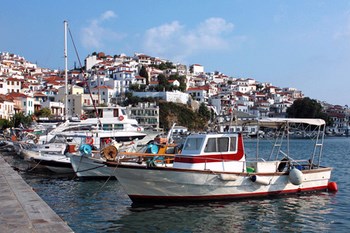 Skopelos is the second largest island of the Sporades, a group of islands located in the Aegean Sea off the east coast of Greece.The population of the island is approx. 6000 (2010). Skopelos belongs to the prefecture of Magnesia, situated between the neighboring islands Skiathos and Alonissos.Skopelos is, like the rest of the Sporades, a popular tourist destination – and hotel offer is wide and varied.

The main town of Skopelos has the same name as the island, and it is beautifully situated on the island’s northeast coast. Also the small town of Glossa and Loutraki port city on the opposite side of Skopelos be mentioned. They are located close to each other (Glossa on a high cliff above Loutraki).

Many have compared the nature of Skopelos with the Italian countryside of Tuscany, because of the green, hilly terrain – such as consists of beautiful olive groves, fertile plains and scattered smågårder. Otherwise, it is also relatively high mountains on the island – where the very highest, Delhi, rises 681 meters

Among the island’s attractions, in addition to the many great beaches, is one example a number of monasteries and small churches. Monastery “Monastery of the Holy Taxiarches (with a church from 600 AD) located just outside Glossa, and is a popular tourist destination. Otherwise, the church of Agios Athanasios from the 1000’s and the Venetian fortress mentioned. Both of these sites are in Skopelos Town.

Many of the scenes in the famous movie “Mamma Mia!” was recorded on Skopelos.

The nearest airport is located on the neighboring Skiathos.