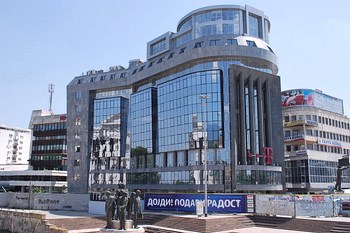 Skopje is the capital and largest city of the Republic of Macedonia.Its 668,518 inhabitants (census 2006) represents a third of the population of the small country.

The city is located in the north of Macedonia, on the banks of the Vardar River and mountains between Skopje and Skopska Crna Gora not far from the border with Kosovo and Serbia.

The people lived in the area already 4000 BCKr. The city has a turbulent history. It has been conquered several times, and was an important city in the Ottoman Empire. Skopje developed rapidly after World War II, but the economic recovery was broken in 1963 when it was hit by a powerful earthquake that let 90 percent of the city in ruins.

In the old Yugoslavia, Skopje was a major producer of iron products until the ironworks were closed. Skopje is today an important trade center for tobacco, wool, fruit and vegetables grown in areas around the city.

Skopje aims to develop as a tourist destination, and in the summer months, the number of music festivals. In September each year the theater festival held YOTs – Young Open Theatre. Museums that are worth visiting are Macadonia museum that tells about the country’s history, and the Museum of Modern Art which also includes several important international works.