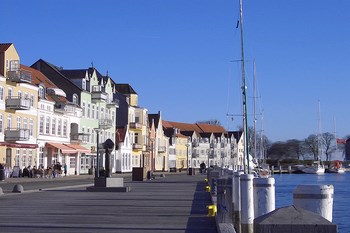 Sønderborg is a city located in southeast Denmark on the island of Als by the Flensburg Fjord – just a half hour drive from the border with Germany.The town is beautifully situated on both sides of Alssund and from Als is the gangway Jutland. Sønderborg has 27,000 inhabitants (2011), and belongs to Region of Southern Denmark.

Sønderborg is a major industrial, commercial, service and place of education, and is known for its charming harbour with cafes and restaurants.

The town is a popular tourist destination, and some of the most visited sights include St Marie’s Church from the 1600s – which is also the vartegn, Sønderborg Castle from the 1100s – which today houses the city’s local history museum, Danfors Universe – a scientific discovery center for all the family and “Augustian sculpture park and arts center”. This is Denmark’s largest sculpture park there is also an art gallery with works created by renowned Danish and foreign artists.

Sønderborg also has good shopping and a nice nightlife with pubs, bars and nightclubs.

Airport Sonderborg Airport is located 7 km north of downtown and has several daily flights to Copenhagen.