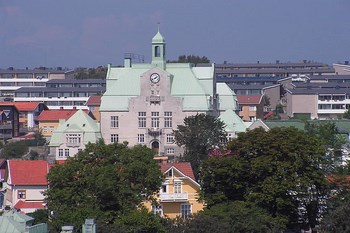 Strömstad is a city and seat of the municipality of the same name in Västra Götaland County. It is located in southwest Sweden 25 miles southwest of Halden Norway.The town has 6,288 inhabitants (2010).

Originally the province of Bohuslän, where Strömstad located, Norwegian territory. The area was transferred to Sweden by the Treaty of Roskilde 1658.

The town was a seat of Sweden’s war against Denmark-Norway, and more than once it was conquered and reconquered the centuries. The warrior king Karl XII of Sweden used the city as outpost for its campaign against Norway in 1716-1718.

Koster archipelago is also a popular tourist destination that can be reached by speedboat from Strömstad. Cost consists of two major islands, North Koster and Sydkoster, many smaller, uninhabited islets, and represents Koster Sea National Park. The city is also known for its marina.

Strömstads industry is largely based on tourism and border trade from Norway. Despite the low population of the city has two systembolog (liquor store) and one of Scandinavia’s largest shopping centers, Nordby Shopping Center. No sooner had Strömstad just a liquor store, but it caused traffic problems near the store. Norwegians have been known to create traffic problems on Maundy Thursday before Easter when there is no day off Sweden.As a solution for the problem kept systembolaget closed on Thursdays.

The nearest airport is Moss Airport Rygge is 55 away. Gothenburg-Landvetter Airport is located about two hours south.