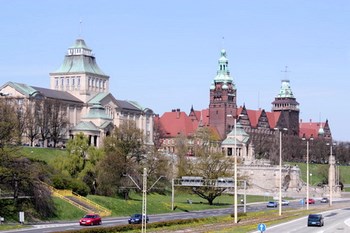 Szczecin is one of Poland’s oldest and largest cities with a population of 407,811 (2011) residents located in northern Poland on the border with Germany.The center spans both sides of the river Oder, and also on several islands.

One of its attractions is the old city with cafes, restaurants and shops. Old town was renovated in the late 1990’s, and many of the new buildings are reconstructions of buildings that were destroyed during World War II. After the war, it was uncertain whether the city should be part of Germany or be incorporated in Poland, but it was in 1946 decided it would be Polish.

It is an important cultural center with many theaters, museums and concert halls. Families with children will enjoy over to take a trip to the puppet theater Pleciuga, and for those who like castles and ancient buildings Ducal palace instead. It also has several cathedrals and churches, one of them is St. Jacobs Cathedral

The city has an abundance of green areas: parks and avenues and avenues of trees planted in the middle of the field to separate the fields of traffic (where often tram tracks are laid). The fact that it resembles Paris a natural explanation.It was rebuilt in 1880 to a design by Georges-Eugène Haussmann, who redesigned Paris under Napoleon III.

Shipbuilding industry is important, and here is Stocznia Szczecinska which is Poland’s largest.  It has a fishing industry and a steel mill. The port is one of the largest in Poland.