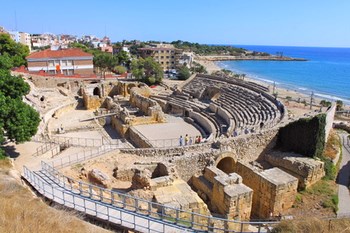 Tarragona is located in northeast Spain on the Mediterranean coast – in the historic district of Catalonia – and is the capital of the Spanish province of Tarragona.The city has about 130,000 inhabitants (2012), and is located 80 km southwest of Barcelona.

Tarragona was founded by the Romans, and was a period of important Roman city on the Iberian Peninsula. Remnants of the oldest history is still visible. This includes the an amphitheater and part of a city wall. The city is situated on the section of Mediterranean coast called the Costa Dorada.

Tarragona is also known for its excellent harbor, protected by a long breakwater – and is also known to be a popular tourist destination. It is among the candidates to be able to boast the title of European Capital of Culture in 2016.

Most of the city’s historical attractions in Old Town, which is located on a hill. The dominant building is the cathedral of the 1200s and the Archbishop’s Palace. In addition to the aforementioned Roman ruins, there is also a well-preserved 35 km long aqueduct.

Otherwise, there are a number of beautiful beaches, both in town and in the rest of the Tarragona region.