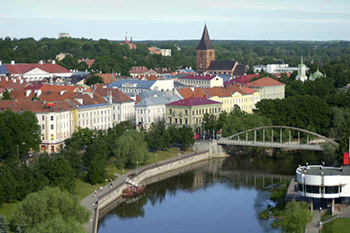 Tartu is Estonia’s second largest city. It is centrally located in the country, 190 km southeast of the capital Tallinn – By the river Emajõgi.The city has about 103,000 inhabitants (2010).

Tartu has been a center of culture and education since the 1600’s – and the city’s university was founded already in 1632. The modern Tartu also has a good deal of industry, especially in food processing, glass and furniture manufacturing.

Many of Tartu’s historic attractions are located at or near the city’s central square – Town Hall Square. A frequently visited attraction in this area is the Cathedral of the 1200s. It lies partly in ruins, but the room at the time (after a restoration in the early 1800s) university library.

Other suggestions edifice is the beautiful John’s Church.

Otherwise, a visit to the Botanical Gardens (established in 1803) and in Vanemuine Theatre (also from 1800) and recommending. Tartu also has a historical museum and an ethnographic museum, both of which are popular tourist attractions.

The modern part of the city consists of a number of large buildings of steel, glass and concrete – but the mix of old and new architecture is considered a success.

The city’s most popular nightlife is concentrated by – and close – Town Hall Square.