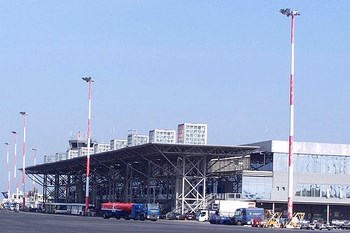 Thessaloniki Macedonia International Airport (SKG) is an international airport located approx. 16 km southeast of the city of Thessaloniki.This is the third busiest airport in Greece.Around 4 million passengers pass through the airport annually.

About 30 airlines have regular flights from Thessaloniki Airport to a number of destinations across Europe.

The airport has facilities for travelers – including there are two-three shops in the terminal building, as well as several restaurants, snack bars and bars. In addition, an information desk, a VIP Lounge, banks and ATMs.

There is no train from Thessaloniki Airport to Thessaloniki city center, so the easiest way is to use one of the many buses that is in route directly from the arrivals hall at the airport. Or you can take one of the taxis who stop in front of the terminal building. A taxi ride to the city center takes approx. 20 minutes.

If you want to rent a car in Thessaloniki, you can contact one of the rental agencies that are located at the airport – including Europcar, Alamo, Hertz, National, Sixt and Thrifty. If you order the car before leaving, the car will be ready when you arrive at the airport.

There are no hotels at the airport, but there are two major hotels nearby: Hyatt Regency Thessaloniki and Athina Palace Hotel.