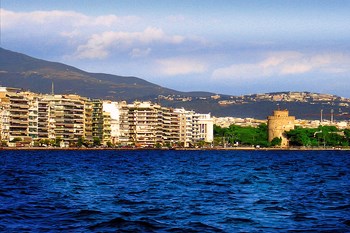 Thessaloniki is the second largest city in Greece, after the capital Athens.It is located at the head of Thessaloniki Bay and has a population of around 360,000 (2010). If the whole urban area with rising number of residents to over 800,000.

Thessaloniki is an important trade and transportation hub – one of the most important industrial cities in Greece. Moreover, tourism is a significant source of revenue. In addition, Thessaloniki a busy port, where it both takes a considerable export of export goods and where the ferry traffic is heavy.

The city was founded already in antiquity – namely, in the year 315 BC Kr. – And was long the capital of the Roman province of Macedonia.

Among the sights are several interesting buildings. Some of the most famous is the Sofia cathedral from 700 AD, St. Dimitrios Church from the 400’s (which was thoroughly restored in 1917 following a major fire), Rotunda (George Church) from 300-number, Galeriusbuen from around 300 and Venetian citadel 1400s (which includes the ruins of Marcus Aurelius Arch). In addition, Thessaloniki a number of interesting museums, including an archaeological museum, an ethnological museum and an art and cultural museum.

Thessaloniki has repeatedly suffered major damage due to fire and earthquakes (the last in 1978), but has been rebuilt each time. Part of the historic architecture, however, been lost or severely damaged. The city in 1997 as European Capital of Culture.

There are also many other attractions in Thessaloniki. Many tourists like to bring their impressions of the famous food market Modiano, located at Aristotelis Square and shopping street Venizelou. Here you can pick and choose from all kinds of meat products, and fruits and vegetables from the region.

The nearest airport is Thessaloniki Airport ( Macedonia ), located 16 km southeast of the city.