Compare prices and find cheap car hire in Toulouse from well-known and local car hire companies. Insurances and unlimited mileage are included. Save up to 70% on car rental in Toulouse through us. 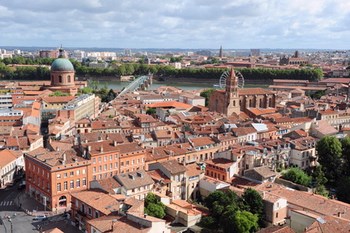 Toulouse is located in the southeast of France – in the region of Midi-Pyrénées – where it is the capital of the Haute-Garonne department. The distance south to the border with Spain and Andorra is approximately. 175 km. The city is connected both to the Garonne River and to the Canal-du-Midi (which connects the Mediterranean sea with the Bay of Biscay). There live approx. 415,000 inhabitants in Toulouse (2010). If you count on the suburbs, the population increases to around 800,000.

With its location midway between the Mediterranean Sea and the Bay of Biscay, Toulouse has always been an important traffic hub. The city’s business sector in recent times has been strongly linked to trade and industry. Here, aircraft production has been particularly important – since the main base for the Airbus aircraft chip is located in Toulouse. In addition, it has been focused on education, and Toulouse got its own university as early as 1230.

Among the attractions the city can showcase are several interesting museums, including the“Musée des Augustins”(originally an 15th-century Augustinian monastery), which has a large collection of sculptures from the Roman era and the Middle Ages. Some architectural gems must also be mentioned, including the Romanesque medieval basilica of St. Sernin. Other churches from the Middle Ages include the Jacobins Church and St. Étienne Cathedral, the latter begun in the 12th century. The city’s 18th-century town hall is also a popular bee. 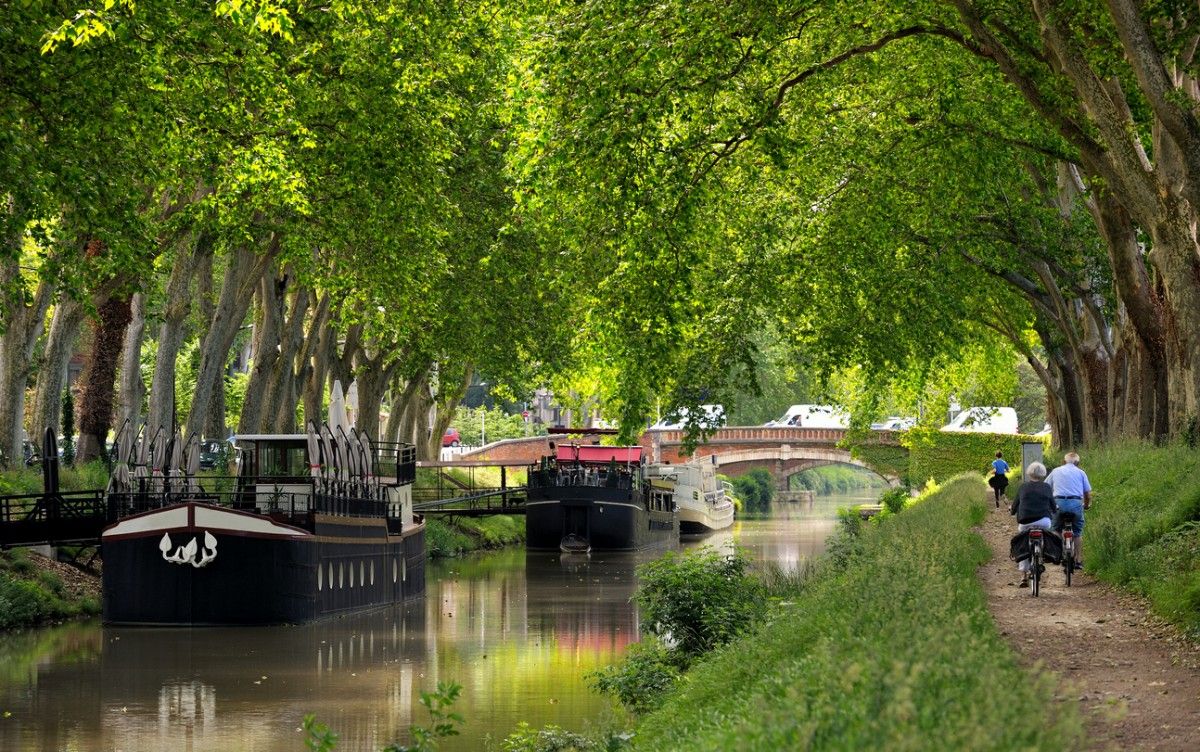 The Canal du Midi was built in the 17th century.

Otherwise, the Canal du Midi is a major attraction – the canal built as early as the 17th century, so that the River Garonne, which flows into the Mediterranean Sea, was connected to the Atlantic Ocean on the Bay of Biscay. The channel runs between Toulouse and Bordeaux.

Toulouse is located in an area of France that is very exciting to explore by car rental. It is a short distance from the city to the Pyrenees and Spain, and to many beautiful small towns and exciting sights of the Occitanie region. Below are a selection of suggestions for driving from Toulouse, several of which go to villages that are on the list of France’s most beautiful villages. 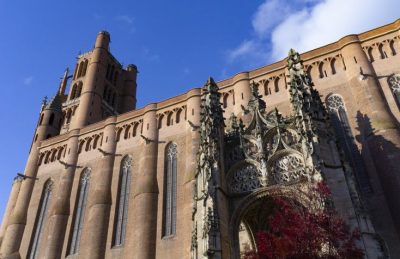 Basilique Cathédrale Sainte-Cécile d’Albi is one of the most beautiful Gothic cathedrals in the country.

Albi is one of the larger cities in the region of Occitanie in southern France, with approximately 50,000 inhabitants. It is located on the River Tarn about 80 kilometres northeast of Toulouse, and with a rental car reaching less than an hour. There are many who travel to Albi when they are on vacation in this region. The big draw plaster is the city’s beautiful location and architecture. The center is concentrated around one of the most beautiful Gothic cathedrals in France, basilique Cathédrale Sainte-Cécile d’Albi. Next to the cathedral is the beautiful Berbie Palace that the archbishops used as a residence. The other buildings in the old town are in the style of these magnificent buildings. You will find especially many mansions built in Italian Renaissance style. Just below is the 1,000-year-old Pont Vieux stone bridge, which is still in use. 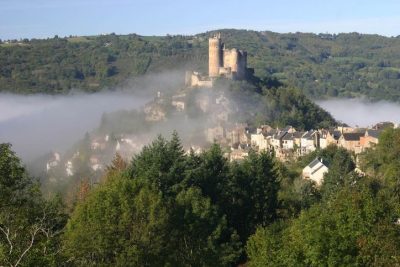 The castle of Najac is said to have been built as early as 1253.

Najac – The King on the Mound in the Aveyron Valley

Najac is a small village located along a ridge above the Averyon River, a small distance north of Albi. Both of these two cities can be visited during a day trip from Toulouse if you have a rental car. The city is famous for its many historic buildings, and especially the castle located on the highest point of the ridge. The castle is said to have been built as early as 1253. Just below you will find a church (Eglise Saint-Jean) that is almost the same age. The other buildings in Najac can be described as very picturesque. Small stone houses located in narrow and cobbled streets,with flower arrangements and sling plants on walls and windows. There are also several good and family-run restaurants in the city. The Averyon Valley is very fertile, providing access to exquisite produce that ends up on the menus of Najac. 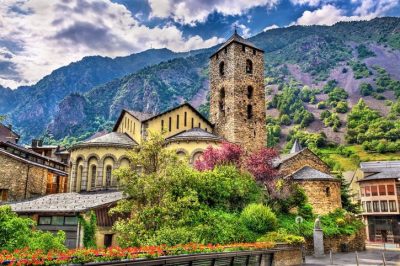 Sant Esteve Church is one of the nice buildings you can see in Andorra la Vella.

Andorra la Vella is the capital of the small principality of Andorra located in the Pyrenees, and between France and Spain. “La Vella” simply means “the city”, a linguistic move to distinguish between the country and the capital that would otherwise have had identical names. In the city centre you will find the Old Town (Barri Antic) as the large drawcard. There are streets creanled, narrow and cobbled, with small shops and restaurants in the beautiful brick houses. When it comes to architecture, the city’s town hall, the 16th-century Casa de la Vall, is most famous. In the old town there are also several beautiful square squares, the occasional church, and some museums. People travel primarily to Andorra to shop, eat good food, and to be able to tell about that they have visited one of the smallest nations in the world. 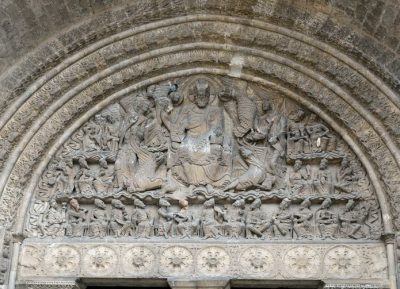 Beautiful details from the entrance to the monastery.

The small town of Moissac is both beautiful and exciting historically. The great drawcard for visitors is Abbaye Saint-Pierre de Moissac, a monk monastery central to the city. It is said to have been established back in the fifth century by the Franconian king Clovis, but the building from that time is long gone. The monastery has been destroyed several times by wars, fire and floods, and most of what you see today is built in the 12th century. The most prominent and impressive part of the complex is the church building itself, and the portal to the church entrance. The portal consists of 76 columns decorated with Romanesque carvings and sculptures you can’t find anywhere like in the world. The monastery is a UNESCO World Heritage Site, and Moissac is one of the stops on the famous pilgrimagethat goes to Santiago de Compostela.

Bordeaux – The Capital of Aquitaine

Bordeaux is an exciting and beautiful big city, and relatively easy to reach by car rental from Toulouse. However, a day trip is rare enough, and one or more nights are recommended. If you have a short time, concentrate on exploring the districts of Saint Pierre and Saint Paul. These are considered the historic centre of Bordeaux and are where you will find the most famous sights. Place de la Bourse with Mirroir d’Eau, Cathédrale Saint-André, Musée des Beaux-Arts and Grand Théâtre de Bordeaux are among those who make the most of it. Also consider stopping by the Palais Gallien. These are the remains of an amphitheatre that the Romans built about the middle of the second century. Also remember to eat when you are in Bordeaux. The city is an eldorado for those who appreciate good food and drink.

Place de la Bourse is located in the historic centre of Bordeaux. 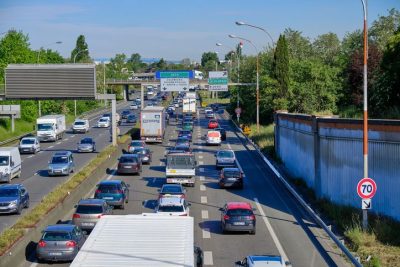 It’s not that hard to navigate your way forward, but there are often queues.

When it comes to parking in the streets of Toulouse, the city is divided into many different zones. The most important thing to keep in mind in this context is that the black zone means that you are not allowed to park there under any circumstances. Blue zone means free parking, but then timed to either 1.5 hour or 45 minutes. The difference between the other zones (red, orange, yellow and green) is mostly the price of parking, how long the car can stand, and at what times you have to pay the fee for the parking. This will be illuminated on highly visible signs.

There is a twenty-dozen indoor parking facilities in the city centre that can also be used, as well as the main hotels’ garages. Prices here vary a bit, but the fee is normally around 3-4 Euro per hour.

Toulouse is a fairly large city, and hence there is usually a lot of car traffic in the city center. It’s not that hard to navigate your way forward, but there are often queues. Most people choose to leave their rental car parked when shopping, visit the sights, or have a meal in the city centre.

Toulouse–Blagnac Airport is located just outside the city centre and serves large parts of the Occitanie region in southern France. In total, there are approximately 9.5 million passengers who use the airport within a year. There are direct flights from about 74 cities in Europe and North Africa to Toulouse-Blagnac, many of which are low-cost carriers such as EasyJet and Ryanair.

The companies offering car rental at Toulouse-Blagnac Airport have their counters gathered in the middle of the arrivals hall (Hall C) and just off the main entrance. The rental cars are parked in a separate reserved area just beyond. As of today, Hertz, Europcar, Sixt, Enterprise, Goldcar, Avis and Budget are represented at the airport in Toulouse.