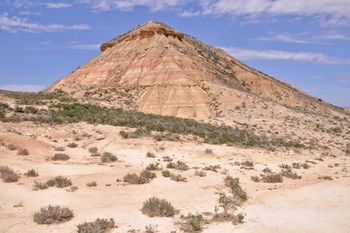 Tudela is a city in the autonomous region of Navarra in northern Spain, more specifically in Ebrodalen.Tudela has approx. 40,000 inhabitants (2011).

It has probably lived in this area since ancient times, but the city itself Tuleda was founded by the Moors in 802 ADKr. It was of vital strategic importance in the 900s. In the year 1119 it was conquered by the Christian General Alfonso. In medieval times – until 1498 – all Jews were banned in Tudela. Yet the city including Known as the home of the Jewish explorer Benjamin of Tudela, who lived in the 1100s.

The main attraction of Tudela, albeit a bit outside the city, national park “bar section Reales de Navarro.” It is located in a unique landscape, and has been compared with the Grand Canyon in USA.

Otherwise, the impressive Tudela Cathedral in the center city’s most popular attraction. It was built in the 1100s, but has been extended in several stages. It thus appears as a structure in a distinctive blend architecture. The cathedral has two towers – a Romanesque and Renaissance.

There are also several other historical churches in Tudela, and other remnants of medieval architecture – including the octagonal tower “Torre Monreal” and the impressive “Palacio Decanal” from the end of the 1400s, which today houses several museum departments.