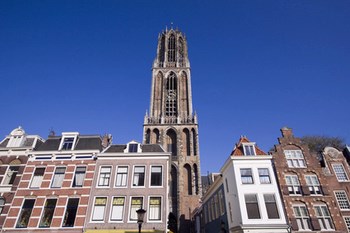 Utrecht, the Netherlands 4 largest city with 307,000 inhabitants (2011), and is the capital of the province of the same name. The town is located 33 km southeast of Amsterdam and the surrounding landscape consists of manors, towns and lakes.

Utrecht is an important road and railway hub and has a major port by the Amsterdam-Rijn canal.

University of Utrecht was founded in 1636, and the country’s largest – with about 30,000 students.

The city has a diverse culture with theaters, cinemas, concert halls, art galleries and museums. The historical center is very well preserved and surrounded by moats. The cityscape is characterized by channels and channel “Oudegracht” runs through the center.

The old town has several tourist attractions – including the former St. Martin’s Cathedral from the 1200s with its 110 meter high tower and the present cathedral.

Also St. Janskerk from the 1000’s with its baroque facade from 1674 is one of the sights here.