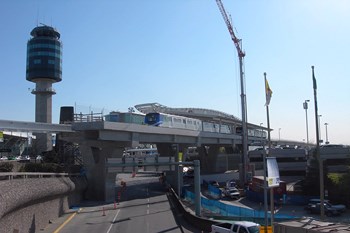 Vancouver International Airport (YVR) is Canada’s second largest international airport, located 12 miles south of downtown Vancouver – On the island of Sea Island.The airport is visited by 16.8 million travelers annually (2010). There are direct flights from Vancouver Airport to Asia, Europe, USA, Mexico and Oceania – in addition to a number of destinations in Canada.

The airport has received several international awards and honors, and was named by Skytrax in 2010 with the title “Best North American airports.”

Airport has three terminals, and visitors have access to a range of facilities – including good range of shops (including duty-free shops), bars, restaurants, cafés, bank, currency exchange, chapel, medical center (there is also a dentist) and pharmacy . At the airport is the Fairmont Vancouver Airport Hotel.

You can use the train (Skytrain), taxi, bus or rental car to get from the airport into the city core. A number of well-known car rental companies have offices at Vancouver Airport – including National, Avis, Budget, Hertz and Dollar / Thrifty.