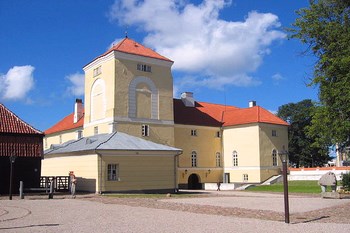 The coastal town of Ventspils is situated in northwest Latvia the Baltic Sea, and has 42,000 inhabitants (2012).The city is thus Latvian 5th ‘s. Venta River runs through the city.

Ventspils is known for its beautiful beaches along the coast, and has one of the 15 largest ports in Europe. There is ferry service from Ventspils to such  Stockholm in Sweden and Travemünde in Germany.

Off the tourist attractions in the city must Ventspils Castle from 1290’s mentioned. The castle was used as a prison in the 1800s, and is now converted into a museum. Also open-air museum in the city is worth a visit. Here you can learn more about Latvia’s fishing culture, and see old fishing lodges, windmills, smokehouse and exhibition of fishing boats.

The city has a number of activities for the whole family – including Water park with artificial wave pool, water slides, hot tubs, saunas and fitness room as well as “Ventspils activity park” with 44 different attractions for children. Here you will find climbing courses, football, electric vehicles, etc..

The city’s airport – Ventspils International Airport – is situated 5 km west of the city.