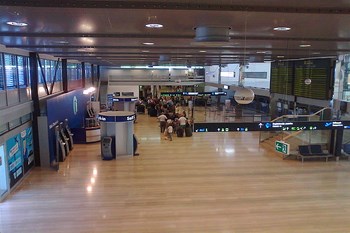 Zagreb Airport (ZAG) is Croatia’s largest airport located 17 km southeast of Zagreb center.The airport is named in their mother tongue “Zracna Luka Zagreb”, but also called often Pleso Airport, as it is located in the district of Pleso.

Zagreb Airport opened in 1966 and has one terminal building. The airport serves around 2.1 million passengers annually.

From the airport there are direct flights to numerous destinations both at home and abroad, and airlines Croatia Airlines, Aeroflot, Air France, KLM, Lufthansa, Easyjet and Wiss Air has direct flights from here to the well-known cities such as Copenhagen , Paris, Moscow, Vienna, Munich, Berlin, Venice and Stockholm.

In addition, a number of car hire offices in the arrivals hall of the airport. Here we find, among others, Sixt, Avis, An Nova, Hertz, Europcar and Thrifty.

If you want to rent a car in Zagreb, it will be convenient to do this before arrival. Then hire car will be ready when you arrive at the airport.

Other modes of transportation to get to the center of Zagreb consists of taxi or bus. Travelling with the shuttle is about. 40 min., And the bus stop at the Central Station in Zagreb.