Compare prices and find cheap car hire in Zagreb from well-known and local car hire companies. Insurances and unlimited mileage are included. Save up to 70% on car rental in Zagreb through us. 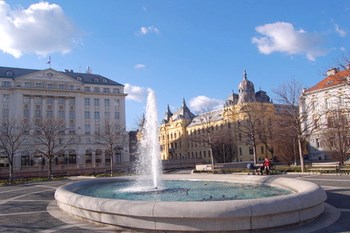 Zagreb is Croatia’s capital and largest city – with about 800,000 inhabitants (2011). The city is located in the north of the country – on both sides of the River Sava.
Zagreb is the country’s political, administrative, economic, scientific and cultural centre, and also an important transport hub. The city has its own university, which was founded in 1669.

Zagreb has about 50 museums and art galleries,20 theatre and music venues, opera, botanical and zoological gardens as well as a number of parks and green spaces.

The old town (Upper City) of Zagreb – “Gorny Grad” – is located on a hill, and here you will find a number of sights. You can, among other things, be able to use the visit Zagreb Cathedral here from 1217, St. Mark’s Church from the 13th century or the Archdiocese palace from 1748. The parliament is also here. The Old Town is a car-free area of Zagreb, and you can take stairs or cable car to get here.

Lower part of the city “Donji Grad” is a more modern district, where the buildings were built after 1800. Here you will find, among other things, a number of museums as well as the National Theatre from 1895.

The Mimara Museum in Zagreb is also recommended for a visit. This is an art museum that also has an archaeological department. Visitors can see exhibitions of both works of art and craftsmanship from prehistoric times until the 1920s.

Zagreb is very centrally located if you want to visit the neighboring hungary, Slovenia and Austria countries, if only for a day or two. You also have a number of beautiful villages and castles in close proximity to the Croatian capital, and at the same time relatively short distance to the Croatian Riviera. The roads in Croatia are good, and with car rental you reach exciting experiences in no time. Here are some publishers for trips with Zagreb as a starting point. 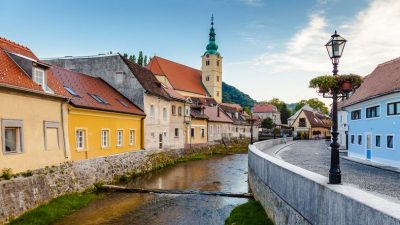 Several Baroque houses can be found in Samobor.

Samobor is a gem among the Croatian small towns. It is famous for its beautiful medieval settlements,mixed baroquehouses, and many exciting sights. The city also has long traditions in cooking, handmade crystals, winemaking and music. In this small town you will find people who, for example, have the professional term biscuit maker, and who come from families who specialize in such niches for generations. Besides strolling around the old town of Samobor, tasting the delicacies, and shopping craft products, people travel here to take walks in the city’s beautiful surroundings,and to go to festivals. It is not far from Zagreb and is located in an area where you will find several other small towns worth a visit.

Blejsko is a lake located in Slovenia, but no further away from Zagreb than you can take a day trip there. The water in the sea derives from glaciers that melt in the Julian Alps, a mountain range stretching from Italy to Slovenia. This is one of the best places in this part of Europe to take a day trip if you appreciate beautiful scenery. One of the most popular activities is to rent a rowing boat. Then you can easily get over to the small island of Blejski otok,where there is a beautiful little church. You can even ring the church bell that is outside, and you will then receive a wish. On a cliff just above the lake you will find what is the oldest castle in Slovenia, dated to the year 1011. There are trails, and from the castle you get the best view of the lake. Also stop by the village of Bled, located at one end of the lake. There it is tradition to eat the city’s own cream cake in one of the many pleasant cafes and restaurants.

The small island of Bleshki otok there is a church. You can even ring the church bell and wish you something, then the wish should come true. 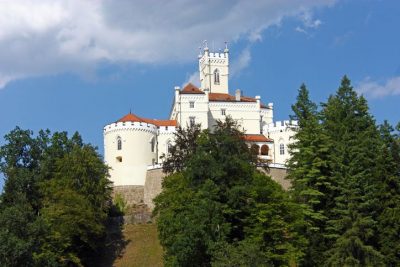 The castle was built in the 13th century and is today a museum.

Hrvatsko Zagorje is an area north of Zagreb in Croatia, and towards the border with Slovenia, which is famous for its beautiful landscape and high density of castles and fortresses. There are also a number of nice small towns and villages there, but the castles are definitely the biggest drawcards for visitors. Among these, the castles Veliki Tabor and Trakošćan are among the most famous.

Veliki Tabor, which means “The Great Camp”, was built in the mid-15th century, but today’s version appears much as it looked since the 16th century after a comprehensive reconstruction. Today, the castle is a museum that is open all year roundand gives you a good insight into life in this part of Europe in the Middle Ages. Trakošćan is somewhat older than Veliki Tabor, and is believed to have been built in the 13th century. This castle also looks completely different today, after a total redevelopment in the 19th century. Like Veliki Tabor, Trakošćan is a museum that can be visited all year round. 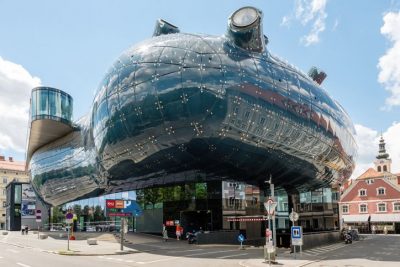 Graz has many unique and special buildings, such as the Kunsthaus Art Center.

Graz – Take a trip to Austria from Zagreb

Graz is the second largest city in Austria, after Vienna. It is considered one of the best preserved historical cities on the continent. Graz has been named as europe’s capital of culture (2003), and capital of design (2009). Hence, the city has a number of exciting and distinctive buildings to showcase. Perhaps the strangest thing is the city’s arts center called “Kunsthaus”– which looks like a vessel from another planet. Such oddities can be found several of, occasionally beautiful settlements from the Middle Ages and other eras. Some of the sights are a UNESCO World Heritage Site, such as the Baroque Castle Schloss Eggenberg. The same applies to the beautiful Old Town (Altstadt von Graz), where one of the finest Christmas markets is held in December every year. The relatively short distance from Zagreb makes it possible to take a day trip to Graz if you have a rental car, but feel free to take an overnight stay if you have time. You’ll hardly regret that, because Graz is one of the most exciting cities in this region.

Krk is the name of the largest island in the Adriatic Sea,and also the largest city on the island. It is located close to the mainland, with bridge connection open all year round. Krk is first and foremost an excellent place to go to whether you want to sunbathe and bathe. There are also several lovely towns and villages there, with the “capital” Krk as the best example. On this island you will find places with vibrant nightlife if you are interested in such, or the most quiet and pleasant fishing villages if it is more your preference. The coast is dazzlingly beautiful, and the sea welcoming in summer. Inland on the island you will find quiet forests that are popular to take walks or bike rides in. 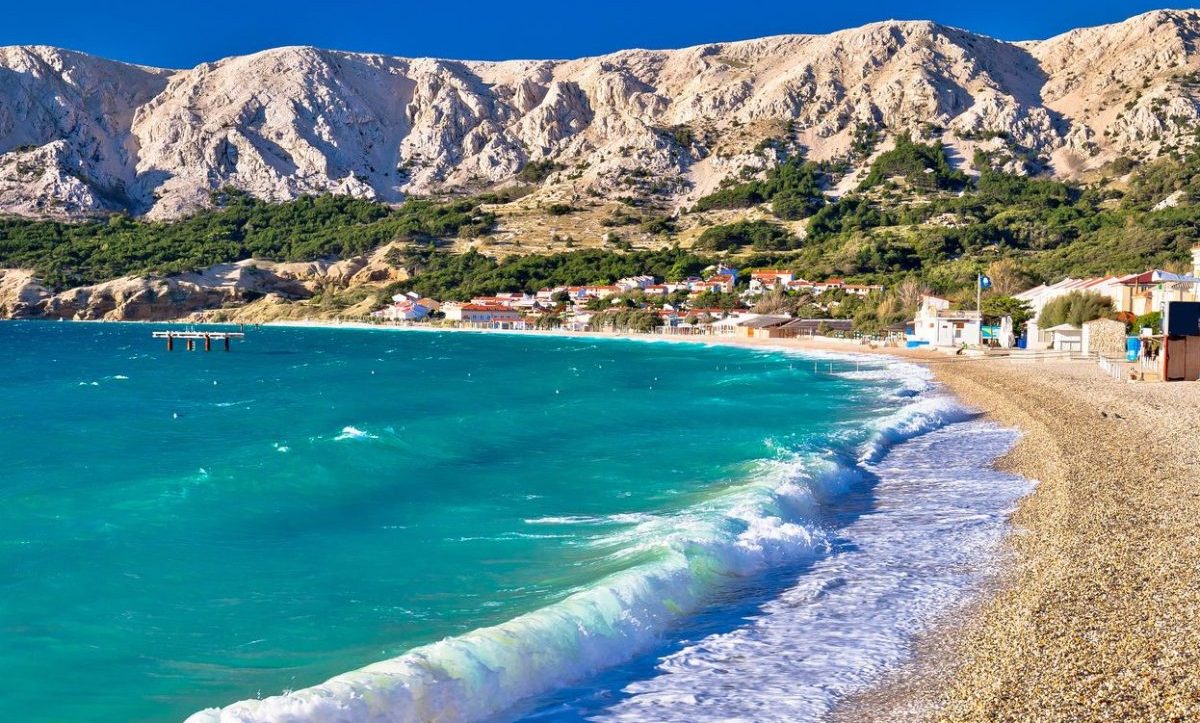 Most people go to Krk to enjoy the beaches and swim. 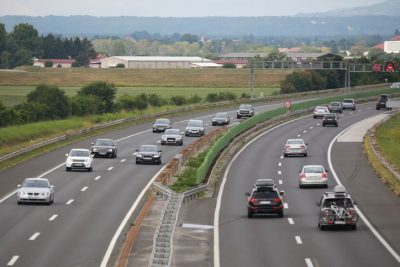 It is far easier to drive outside the city and the roads are good.

It is not always easy to find parking in the streets of Zagreb, both because the streets are narrow and have little parking space, and because the competition for parking spaces is great. If you find parking space in a street you will have to pay the fee according to different zones. It will be stated on signs how long the car can stand, and at what times a fee is required. The city has three different zones – red, yellow and green – where the red zone is most expensive. It is usually easier to bet on one of the many parking garages, although the prices there are somewhat higher. However, it is affordable to park in Zagreb compared to most European capitals.

The centre of Zagreb is not very easy to find with car rental. The Old Town, Gradec or Gornji Grad in Croatian, are closed to traffic and reserved for pedestrians only. The streets around the old town are also often narrow and one-way. Most people therefore choose to leave the car parked, and instead aim to walk or take the tram.

In rush-hour traffic, it may take some time to get out of the city centre if you are going to take an excursion to other places in Croatia. Outside the city it is far easier to drive, and especially on the stretches that have highways. The standard of road in Croatia is consistently good, but still drive carefully. Many motorists drive fast, and the country roads can be somewhat unclear here and there. 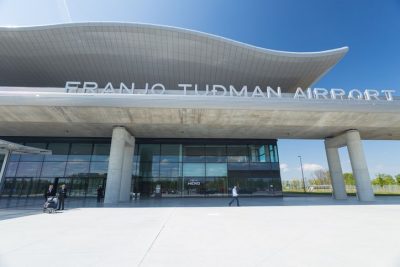 Zagreb Airport Franjo Tuđman is the largest airport in Croatia. Approximately 3.5 million passengers a year are served here. You can fly directly to Zagreb from some of the largest cities in Europe, but many of the flight routes are seasonal. There are also intermittent flights between Zagreb and destinations in Israel, Thailand, the Emirates and Canada. The airport has a relatively large terminal building, but everything is to be found under the same roof.

The car hire companies are gathered in the arrivals hall,close to where you pick up your luggage. The rental car will be in a separate area in the nearby car park. As of today, there are 22 car rental companies at Zagreb Airport,including Hertz, Alamo, National, Enterprise, Europcar, Dollar Car Rental, Thrifty, Sixt, Avis and Budget.