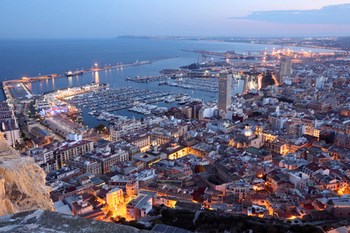 Alicante is a city located in southeast Spain the Mediterranean.Alicante is the second largest city in the region Valencia, and is the capital of the province of Alicante.

The city’s economy is largely based on tourism and wine production. Alicante is the center of the Costa Blanca and the many tourists choose this city as a resort perhaps primarily because of the mild climate and beautiful beaches.

The old town of Alicante is a major tourist attraction – with its historic buildings, its narrow streets and its cosy cafes, restaurants and shops.

A famous landmark in the city is the castle “Castillo de Santa Barbara” from the Middle Ages. Parts of the castle are from ca. year 230 BC Kr. The castle sits on a hill – 300 meters – and here you get great views of the bay Costa Blanca.

Below the castle is the city with City Hall from 1760, Santa Maria church from the 1300s and the Renaissance church of San Nicolás de Bari from the 1700s.

Other tourist attractions in Alicante include The archaeological museum “Marq” – where visitors get an interactive journey through history – with exhibits of artifacts from prehistoric times to modern days.

Otherwise, the city has many markets and parks, several inviting beaches – where Playa San Juan is one of the most popular front “Explanada de Espana” – surrounded by palm trees, bullring from 1849 (the bullfighter museum) and the Museum of Contemporary Art – which one can see exhibitions of works from such Miró, Dalí and Picasso.