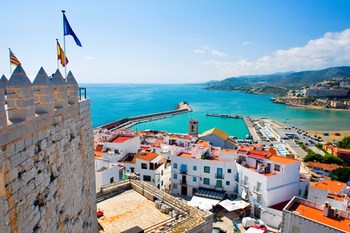 The port city of Valencia is located on Spain’s east coast, is the capital of both the region and the province of Valencia. The city has 807,000 inhabitants, while the metropolitan area has a population of nearly 1.5 million. Thus Valencia country 3 largest city (after Madrid and Barcelona ).

Valencia is located on a flat coastal plain – where the river Turia flows into the Mediterranean Sea. The town has a large tourist traffic, and is also an important transport hub. From the port, the ferry to the famous tourist islands Ibiza and Majorca.The city also has university – which was founded in 1501.

There are a number of interesting tourist attractions in Valencia, and the old town has many buildings in the Moorish style. There is also Le Seo Cathedral from 1200 – 1400’s, and adjacent is the 60-meter high bell tower “El Miguelete”.

In the old city, one can also see two mighty gates from 1300 – 1400’s, which originated from the ancient walls. In addition, one should take in building “Lonjade la Seda” from the 1400s.

Outside the city of Valencia is the modern Science Park “City of Arts and Sciences y de” – which is a popular culture – and science center with eg Planetarium, Art Museum, IMAX theater and aquarium.

Valencia has otherwise a botanical garden, a zoo, beautiful beaches, great shopping and a lively nightlife.