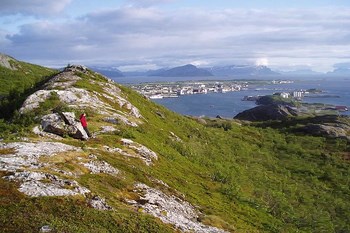 Bodø is both a municipality and city located in the county of Nordland tip of a peninsula out over the fjord. It has 38 326 (2012) inhabitants and is the second largest city in Northern Norway.Bodø is also Nordland county capital.

Almost the entire city was bombed during the 2 World War, and therefore most of the houses again.

Saltstraumen, the world’s strongest tidal current which is located southeast of the city, is one of the most visited places in Bodø. Bodo area has the densest population of eagles. The area is also well suited for hiking in summer and winter, in winter, the resort is an important attraction. Bodø is situated north of the Arctic Circle and the midnight sun is in the sky around one and a half months during the summer.

The city hosts festivals throughout the year, one of the more famous is the Nordland Music Festival in August. Many head to Kjerringøy which is 46 miles north of Bodø. The place is mainly known for having one of the best preserved trading and market-place, and the great natural environment is in itself an experience.

Bodo is a key gateway for land, air and sea transport. It is the terminus of the Nordland Line is a railway between Trondheim and Bodo.Bodø is the port of call for Hurtigruten from Bergen to the North Cape.

Bodø Airport is located just 1 km from the center and therefore within walking distance.