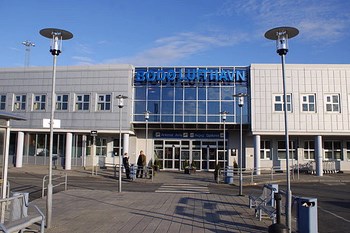 Bodø Airport (BOO) is located in Nordland county – about 2 km southwest of Bodo center.The airport serves 1.5 million passengers a year and has direct flights to both domestic and foreign.

Bodø Airport was opened in 1940 and has a terminal building. Airlines SAS, Norwegian, Widerøe and Austrian Airlines flies to 25 destinations from here at home and abroad. Popular routes include  Oslo, Tromsø, Trondheim, Bergen, Vienna and Las Palmas.

There are no hotels at Bodø Airport, but there are several in Bodø.

Norwegian Aviation Museum is located next to the airport and has many exhibits of military aircraft.

If you want to rent a car in Bodø, a number of car rental agencies at the airport its affiliates. Here are the major international players such as Avis, Hertz, Budget, Europcar and Sixt.

If you book your car rental before traveling to Bodø, the car will be ready when you arrive at the airport.