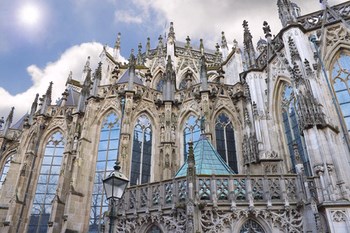 Hertogenbosch – which is often just called Den Bosch – the south of the Netherlands, and is main town in the region of Noord-Brabant.The city lies on the River Dieze – about 80 miles south of Amsterdam.

The Bosch is a major commercial center and an important industrial city. The city was founded in the 1100s, and is one of Holland’s oldest cities.

In Den Bosch can be seen from the medieval city walls, and a major tourist attraction here is the cathedral Sint-Jans from the 1300s in the gothic style. The church has a wonderful and richly decorated façade.

Other popular tourist attractions in Den Bosch include building “Moorian” from the 1300s – which is the Netherlands oldest brick house, city hall (“Stadshuis”) with its facade from 1640 and Noordbrabants Museum – with exhibits of altarpieces, historical artifacts, works of Van Gogh and a special section with an exhibition of contemporary art.

It is also great shopping in Den Bosch, and in the old town’s narrow streets with a variety of shops and nice restaurants. Near the old town is also home to the popular shopping center “The Arena”.

The Bosch hosts several annual festivals – including a theater and a jazz festival.