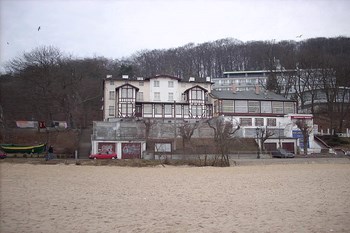 Gdynia is a city in northern Poland which is located 20 km northwest of Gdansk by Gdańsk.The city has a population of 249,139 (2011) inhabitants.

The cities of Gdynia, Gdańsk and Sopot (known spa) called “triple city” because they almost overlap and together account for a population of one million people. Gdynia is one of Poland’s most important ports and Shipyards and fish processing is an important part of the economy

Until 1924 the Gdynia a fishing village, but as it was built up to a harbour city after the Versailles Treaty and for a period was Poland’s only port and naval base. It was subjected to very severe damage during the 2 World War.

It is close to the sea with swimming and boating are Gdynia major attraction. It has a large sailboat harbour, and the summer months there are several sailing and regatta competitions. Each June held marine festival that attracts many international tourists. The Polish Maritime Museum in Gdansk, 20 km further south.There are several tourist agencies that arrange diving trips and courses, expeditions to the wreck in the Gulf, fishing trips and courses in driving a motorboat. The main street Świętojańska is a good place for shopping as well as shopping center Batory.

The nearest airport is Gdańsk Lech Wałęsa Airport, 26 kilometers south-west of the city of Gdynia.