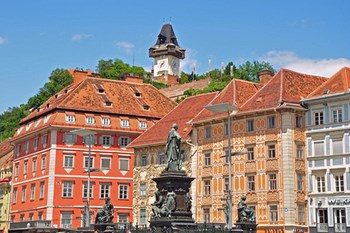 Graz is located southeast of Austria and is the country’s second largest city with about 267,000 inhabitants (2012).The city is located on both sides of the river Mur – not far from the border to Hungary and Slovenia.Graz is the capital of the state of Styria and is located on the south side of the Alps.

Graz has a significant industrial production of such iron and steel, machinery, optical instruments, leather and textile. The city is also an important crossroads. In addition, Graz six universities – where the oldest founded in 1586.

The city has a number of museums, theaters, operas (from 1899) and art galleries – and was named the European cultural capital in 2003.

The old town of Graz is a UNESCO World Heritage Site. Here you will find beautiful streets and alleyways, parks and several historic churches – including a Gothic cathedral from the 1400s. Also Leech church from 1293, a visit.

On the Schlossberg of downtown, the city’s famous clock tower from the 1500s and the ruins of a fortress from Charlemagne’s time. You can use the cable car lift or stairs to get up here.

Graz Airport is located 10 km south of the city center and the international airport.