Compare prices and find cheap car hire in Johannesburg from well-known and local car hire companies. Insurances and unlimited mileage are included. Save up to 70% on car rental in Johannesburg through us. 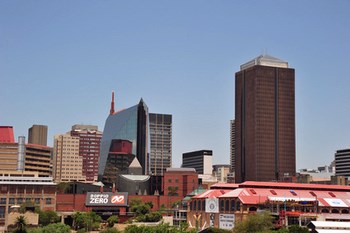 Johannesburg, south Africa’s largest city, is the capital of Gauteng Province , located in the northeast of the country. The city has around 3.3 million inhabitants (2011), and is the country’s premier trade and finance centre as well as a hub for rail and road traffic.

Johannesburg’s location in the Witwatersrand mountain area has made the city the centre of the large gold fields in the area – and there are a number of large mining facilities around the city. It was also the gold deposits that gave the shock to the founding of Johannesburg in 1886.

Johannesburg is famous for its many universities, colleges and museums. These include a geological, ethnological and military history museum. Johannesburg also has its own railway museum.
Of the sights otherwise, the zoo and a large planetarium must be mentioned.

The central districts are characterized by a regular street pattern and large public buildings. The main street Eloff Street is typical in that respect. The apartheid system meant that these areas of the city were largely inhabited by the white minority population, while blacks and people of color lived in their own districts on the outskirts. Although the racial divide has been lifted, this pattern of habitation still characterises South Africa’s largest city. The largest and most famous of the black districts is Soweto.

There is also a separate district that is largely devoted to cultural activities – primarily performing arts. It’s called Adjacent, and here there are a number of experimental theaters. Some of them have roots in the protest and rebel movements under apartheid rule.

The central districts of Johannesburg are characterized by a regular street pattern and large public buildings.

Johannesburg is a very good starting point for excursions with car rental. The city is centrally located between a number of exciting places, sights, cultural monuments and national parks. In addition, you have a short distance to other cities that are worth a visit and can be easily reached by car. Here is a selection of some of the most popular rides from Johannesburg. 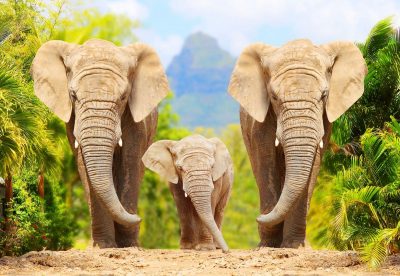 Kruger Park is one of Africa’s most famous, and also among the largest and most popular safari parks on the continent. Here you get good chances to get to see all the so-called“Five Store”,that is, lion, elephant, rhinoceros, leopard and buffalo, as well as many other great animal species. Although it is possible to book day trips starting in Johannesburg, it is recommended to travel to the park and start the safari from there. One or two nights will yield far greater benefit, than a short day trip where most of the time goes to transport to the park. Kruger Park should be experienced both in the morning, when the animals seek the river to drink, and in the evening, when the sun sets in the majestic landscape.

Cradle of Humankind – Visit the Cradle of Mankind

In Guateng province, just north of Johannesburg, there is an area of excavations where many traces of some of the first humans on Earthhave been found. The Cradle of Humankind is probably not a very precise description, for there are other discoveries in Africa that are older. Nevertheless, this is a very interesting place for those who want to know more about our roots. The finds are mainly from cave formations in Guateng, such as Sterkfontein Caves. Among other things, a fossil of the human species Australopithecus Africanus is found that is about 2.3 million years old. In Sterkfontein, the finds are exhibited at a separate center, where you can also get guided tours down into the caves. 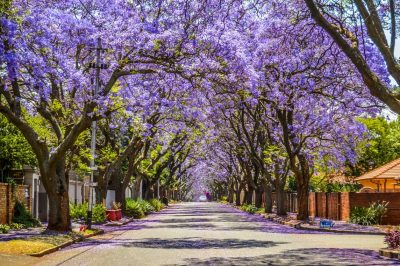 Pretoria is also called Jacaranda City used on the folk mouth. It comes from the fact that everywhere in Pretoria there are lovely Jacaranda shrubs, with purple flowers decorating up the streets.

In South Africa, there are technically three capitals, Cape Town, Bloemfontein and Pretoria respectively. The latter serves as the country’s administrative center. The city is very beautiful, and is dominated by impressive and monumental buildings,greatly placed in green surroundings. Pretoria is also called Tshwane in the Bantu languages, as well as jacaranda city being used in the common mouth. Lately, because everywhere in Pretoria, gorgeous Jacaranda shrubsgrow – with purple flowers decorating up the streets. In Pretoria you will also find many exciting monuments, museums, cultural centers and other sights. 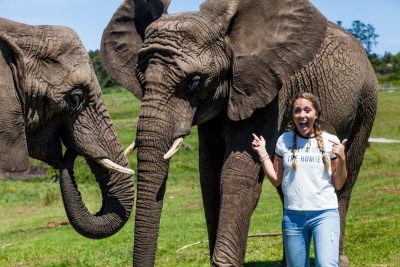 At Adventures With Elephants you get a unique experience with the elephants.

If you take a fairly short drive by car rental north from Johannesburg, towards Kruger Park, you will pass the town of Bela-Bela which is famous for its hot spring water. In that area you will also find one of Africa’s best nature and animal experiences. The Adventures With Elephants centre is retraining elephants who have problematic behaviour, research, and education that focuses specifically on the majestic animal. They welcome visitors who get a unique meeting with the animals on the farm. For example, you can take a bath with the elephants, you get to feed the animals, and you can get yourself a safari on the back of one of the elephants. In the same area you will also find a number of camps and hotels that arrange more extensive safaris. 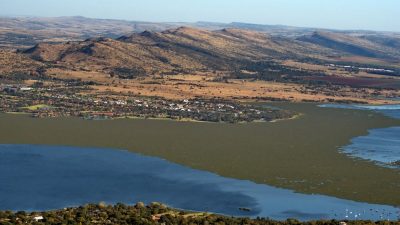 Hartbeespoort Dam – Resort town at the foot of the Magaliesburg Mountains

This resort town is one of several small towns located around the artificial lake Hartbeespoort. The area has many good hotels and other accommodation solutions, as well as offers a number of exciting experiences. You will find several golf courses here, you can rent a boat and take trips on the pond, there are several centers with wild animals you get to greet, and there are especially many activities here that are intended for families. Among the most popular activities are safari tours on horseback,visits to the snake park, visits to the elephant center, and visits to the center where take care of orphaned monkeys. 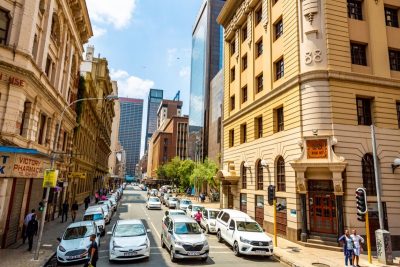 Parking spaces in the streets are marked, but it is recommended to park in parking lots with security.

In the center of Johannesburg you will find many safe parking garages and outdoor parking facilities. Most of these have good security, but there is something more to park here than along the streets. Parking spaces in the streets are marked, but here not all places are equally safe. Look for parking spaces with security. Most shopping centres are also good options to put your rental car on. Please note that at the shopping centres it is common for free parking if you can present a receipt that you have shopped inside the centre.

The streets of Johannesburg are considered among the most congested in the world,bypassed only by Cairo and Cape Town. Nevertheless, it is usually nice to get there outside rush hour. When people are going to and from work there are often long queues, and then it is usually best to avoid going into traffic.

It is recommended that you be extra careful when driving in South Africa, although the vast majority do not experience anything unpleasant. The doors of the car should be locked, and the windows closed, especially in the cities. Also, understand which areas and coats you should avoid.

The main airport in Johannesburg is called O.R. Tambo International Airport. It is both the continent of Africa and the country of South Africa’s largest, with over 21 million passengers each year. Because the airport is 1,700 meters above sea level, and the air thereof is thinner than in the lowlands, O.R. Tambo Airport has one of the world’s longest runways. There are six terminals at the airport. Two of these serve international flights (A1 and A2), and where you end up depends on which airline you arrive with.

The counters of the car rental companies are gathered in a separate area close to the parking garage, on the ground floor of the main terminal. As of today you will find the largest international companies here, such as Hertz, Avis, Thrifty and Europcar, as well as 5-6 local and regional players. All counters are open 24 hours a day.

O.R. Tambo Airport has one of the world’s longest runways!