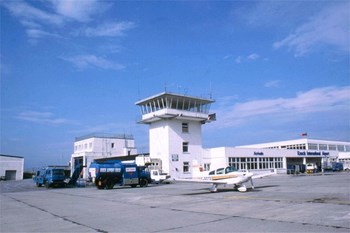 Knock Airport (NOC) – or Ireland West Airport Knock, which is the official name – is located on the west coast of Ireland, 20 km southwest of the city center Knock.The airport was opened in 1986 and has recently had a strong growth. Approximately 650,000 passengers pass through here annually, and Knock Airport has several times been voted Ireland’s “Best Regional Airport”.

Several budget airlines, including Ryanair and Aer Lingus, has regular flights from Knock Airport to other destinations in the UK, Spain and Portugal.

To get from the airport to Knock and other cities in the region, one can use the well-developed bus service or taxi.

Those who want to rent a car at Knock Airport, can turn to one of the international rental agencies that have offices here – including Avis, Budget, Hertz, National and Europcar.

There are no hotels at the airport area, but the offer is good in the area. In the terminal building there is a restaurant, café and bar – and a gift shop and an internet kiosk.