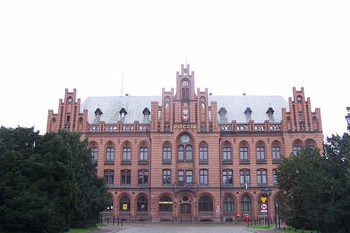 Koszalin is the largest town in the Middle Pomerania and is located north-west of Poland 12 km south of the Baltic Sea.It has a population of 107,146 (2009) inhabitants. Nearby cities Kamien Pomorski, Mielno and Kolobrzeg.

The first historical source that mentions the city’s Greater Poland Chronicle from 1108. One of the oldest buildings is St. Maria church from the 1300s. Remains of a medieval city wall is preserved.

Koszalin is surrounded by beautiful forests and reserves, including the bird sanctuary in Parnowo (5 km to the west) and the Lubiatowskie Lake (5 km to the south). The highest point in Koszalin is Chelmska which has a tower on top where one can enjoy the view. The proximity to the Baltic Sea is important, and this part of the sea is known for its beautiful sand dunes, cliffs and wide sandy beaches.

The 4th March 1945 Koszalin was occupied by the Soviet Union after the 2nd World War. According to the Potsdam Agreement was the city that had previously been under Germany put under Polish administration and renamed Koszalin.The majority of the German population fled or were expelled.