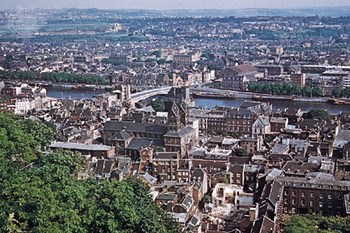 The city of Liège in the east of Belgium, and is the administrative capital of the province, which has the name of Liège. The city is located in the French-speaking region of Wallonia on the River Meuse, and has approximately 200,000 inhabitants (2010). From Liège is a short distance to both Netherlands and Germany.

Liège is the largest and most important city in the region, and is also an economic and cultural center. In addition, Liège an important traffic junction with road access to major cities both in and outside Belgium.

Liège has a university, founded in 1817, theatre, opera and museums. The cityscape is characterized by both old and new architecture, and some the most popular historic attractions include St. Paul’s Cathedral from the 1200s, St. Denis Church from 900s and elegant town hall from 1714.

A visit to the art museum, one example see works by Picasso, Gauguin, Monet and Chagall. Other attractions in Liege which is worth a visit is the Science Museum and the Natural History Museum.

Liège is also known for its vibrant nightlife, its excellent shopping opportunities as well as their annual festivals.