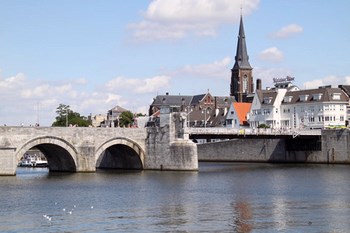 Maastricht is located at the south of the Netherlands by the river Maas, and is the capital of the province of Limburg.The city has 121,000 inhabitants. It is a short distance from Maastricht to both Belgium and Germany, and 35 km in southern direction is the Belgian city of Liege.

Maastricht is an administrative and commercial center and an important cultural center for the province. The city is also an important railway junction.

Maastricht is one of the country’s oldest cities, and was founded by the Romans as “Trajectum as Mosam”. In the Middle Ages, the city was an important center of art and culture. Maastricht is today famous for under the letter of the European Union Treaty of 1992 – the so-called “Maastricht Treaty”.

Some popular tourist attractions in Maastricht include st. Servitius Cathedral from 500 century, the Romanesque “Onze Lieve Vrouwekert” from 1100’s, 1470’s courthouse and City Hall from 1664.

Many tourists visit Bonnefanten museum in the city – where such can see exhibits of Roman sculptures and monuments.

In addition, the city organizes an annual carnival, and often have events and fairs in the MECC convention center.