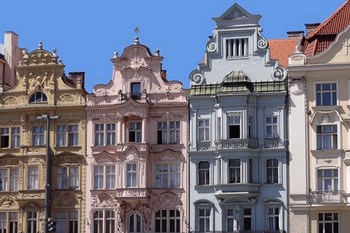 Plzen, or Pilsen, a town in the Plzeň region west of the Czech Republic. The city has a population of 172,932 (2010) inhabitants. It is located where the four rivers Radbuza, Mže, Úhlava and Úslava meet, ca. 90 km west of Prague.

The city is an academic, cultural and economic center west of the Czech Republic, and has also an important university. The city has a 20 km underground tunnel which is among the longest in Central Europe. Part of this network is open to the public for tours of less than 1 km and up to a depth of 12 meters.

The city is known worldwide for its breweries that produce lager. The brewery was founded in 1839, and staff the Bavarian brewer Josef Groll who produced the first modern pilsner beer in October 1842. The clear, golden beer was considered a sensation. A popular tourist attraction is a guided visit to the beer brewery Plzeňský Prazdroj.

The town was first known as a castle in 976 Plzeň became a major trading center, and the Municipal Court 1292. The most prominent sights of Plzen are the Gothic St. Bartholomew’s Cathedral, founded in the late 1200’s. Tower of over 100 m is the highest in the Czech Republic. Hall from the Renaissance and the second largest synagogue are other attractions.