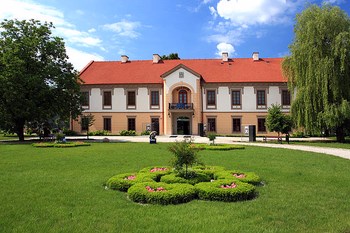 Stalowa Wola located in southeast Poland in the region of Subcarpathian Voivodeship.It has a population of 64 353 (2008) inhabitants.

Stalowa Wola is one of the youngest towns in Poland. It was designed in the ’30s for workers at Huta Stalowa Wola, a large steel factory that creates weapons and other equipment for the military. When Huta Stalowa Wola and other factories were established in the 30s, it was part of the Polish government’s strategy that they would be far from the border with Germany and the Soviet Union.This was particularly important for the production of weapons and high-tech goods in the years between the world wars.

Stalowa Wola is famous for being the hometown of Dr. Eugene Lazowski often called Poland’s answer to Schindler. During World War II created the Dr. Eugene Lazowski, a military doctor who belonged to the Polish resistance Armia Krajowa, rumors about a fake epidemic Epidemic typhus in the town Rozwadów (now a district of Stalowa Wola) and the surrounding villages and towns. He played for the German health anxiety and ideas of purity and saved an estimated 8,000 Polish Jews from certain death in Nazi concentration camps. Because of fear of contagion, they were not sent to concentration camps.

The nearest major airport is near Rzeszów-Jasionka Airport, 66 km from the city center.