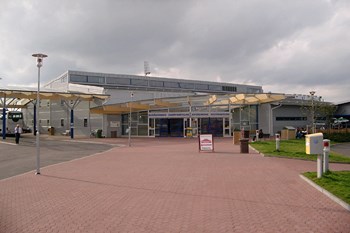 Stockholm Skavsta Airport (NYO), formerly called Nyköping-Oxelösunds flygplats, located 7 km outside Norrköping and 100 km south of Stockholm.It is considered one of Stockholm four airports.There is a shuttle between the airport and Stockholm, both direct bus and buses on the road. There is also a shuttle to Norrköping and Linköping. The five car rental companies that offer their service at the airport are Avis, Europcar, Sixt, Budget and Hertz.

In 2010 visited 2,507,772 passengers, airport, and it is Sweden’s third largest airport.The airport is the main hub for Ryanair and low-cost airline flying to over 40 European cities. Other airlines serving Stockholm Skavsta Airport is Wizz Air and Gotlandsflyg. In 2012, the terminal was completed.

Stockholm Skavsta Airport has a good selection of food and beverage outlets as well as duty-free shops and other shopping opportunities. Other amenities include a tour desk and wireless internet (not free). The newly Connect Hotel Skavsta is located 75 m from the passenger terminal and have conference facilities.