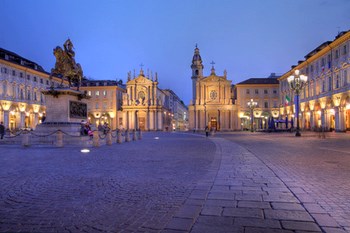 Turin is located northwest of Italy by the river Po, and is the main city in the Piedmont region. Turin is Italy 4 largest city has 963,000 inhabitants (2011). The city is located 120 miles southwest of Milan.

Turin is an important commercial, industrial and cultural center of the region. The city is surrounded by the Alps to the west and north, and the Monferrato hills to the south. Turin hosted the Winter Olympics in 2006.

Centrally located in the historic city center square “Piazza Castello” – a pedestrian area with restaurants / cafes and bars. There are also medieval fortress “Palazzo Madama” from the 1200s. Inside the castle you can visit an art museum.

Other popular attractions include Turin building “Mole Antonelliana” from 1863 – where today you can visit a movie museum or take the elevator to the building’s observation platform, Cathedral “Duomo di Sa Giovanni” from 1498 – which houses the famous “Shroud of Turin” and the museum “Museo Egizio” – with exhibits of ancient Egyptian art.The museum has the world’s second largest collection of mummies (by Museum Cairo ).

The impressive royal palace “Palazzo Reale di Turin” from 1660’s is also a popular tourist attraction in the city. The palace today is museum and visitors including see a self-portrait of Leonardo da Vinci. Royal Palace is a UNESCO World Heritage Site.