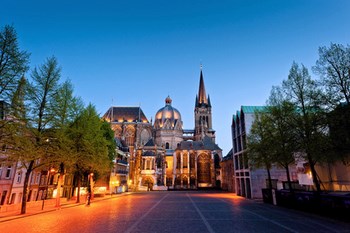 Aachen is a German city located in North Rhine-Westphalia 40 km west of Cologne at the very border of the Netherlands and Belgium.The city has a population of 260,454 (2011) inhabitants.

Aachen is famous for being a spa town with traditions far back in history. It originated as a Roman spa town because of the hot sulfur springs. It was abandoned after the Roman Empire until 768 when Charlemagne came to Aachen. He built a castle here and the city became the capital of Charlemagne’s empire. The city served as kroningsby for the German-Roman emperors until the 1500s.

Other attractions in the city are the Town Hall (built in 1530) with its many styles from Gothic to Baroque, which stands on the ruins of Charlemagne’s palace. Two of the gates are left, and parts of the medieval city walls that still has five towers. The Jewish synagogue was destroyed on Kristallnacht 9 november 1938, but was restored and reopened in 1995.

The International Charlemagne Prize, one of Europe’s most prestigious awards handed out in the city.

Maastricht Aachen Airport is located in the Netherlands near the city of Beck around 40 miles away. Düsseldorf International Airport is 80 km away.