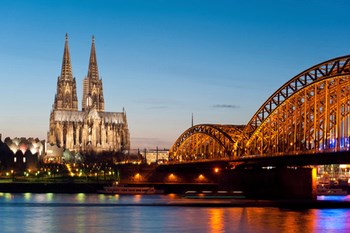 Cologne is located in the eastern part of Germany, in North Rhine-Westphalia.The city has about 1 million inhabitants (2011), and is the 4th highest (after Berlin, Hamburg and Munich ).

Cologne is located on both sides of the river Rhine, eight bridges connecting neighborhoods. Cologne is a major transport hub and has a large inland port. Cologne part of urban and industrial region “Rhein-Ruhr”.

The city is an important economic, cultural and historical center of the region and a major trading center. It is also one of Germany’s most important financial center – with a number of banks and insurance companies. In addition, a University Cologne, where ca. 50,000 of the residents are students.

In the Old City “Altstadt” is the famous Cologne Cathedral from the 1200s. This is a Roman Catholic cathedral, and one of the city’s most famous landmarks. Cathedral has two towers (157 meters high), and is the world’s second tallest Gothic building. The Cathedral has since 1996 been on the UNESCO World Heritage List.

The city also has a number of parks and recreation areas – including “Rheinpark”. To get here you can take the cable car “Rheinseilbahn” – which has existed since 1957. By Rheinpark is also the city zoo.

Cologne has otherwise good shopping and a vibrant nightlife.