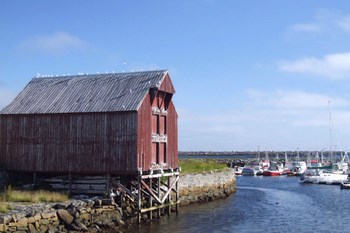 Andenes is a village with 2263 inhabitants (2012) in Andøy municipality in Nordland county. It is located on the northern tip of Andøya in Vesterålen. Andenes is one of the largest fishing villages in Northern Norway, with comprehensive year-round fishing and fish exports.

A 40 meter high lighthouse from 1859 is an important landmark for Andenes. The village is protected by a breakwater facility that was built already between 1896 and 1905 because the Arctic Ocean is strong at.

Beautiful scenery with craggy mountains and seas makes Andenes a popular beach resort located at the very top of Lofoten. Among the most popular attractions in Andenes is whale watching. In Andendes center is Whale Centre with an exhibition about whales and whale research, tours and cafe. This is also a Northern Lights Center. There are several accommodation options in both Andenes camping, cabins and hotels.

In February arranged Northern Want festival with workshops, concerts, and especially good opportunities to see the Northern Lights. Andenes is also the organizer of the rock festival Rock Against Drugs. Andendes fishing festival is another popular event.

In summer there is a ferry connection between Andenes and Gryllefjord on Senja. Highway 82 runs south to Risøyhamn and Sortland. Andøya Airport is primarily military, but also civilian traffic and daily direct flights to Bodø and Tromsø.In the summer of 2012 began with the Norwegian direct flights to Oslo.