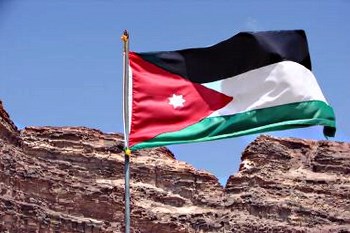 Jordan is an Arab kingdom in the Middle East / West Asia. It borders Syria to the north, Iraq to the north-east, Israel and the West Bank to the west and Saudi Arabia in the southeast.The capital is Amman and Jordan has a population is 6,508,271 (2011) inhabitants.

Jordan’s only port is located on the south-western tip, at the Gulf of Aqaba, which is shared with Israel, Egypt and Saudi Arabia. Over half of Jordan is covered by the Arabian Desert .. Unlike the Arab states in the south and east, Jordan has no oil resources. The economy depends largely on services, tourism and development, where USA is the main supplier.Jordan is an important ally of the U.S., and with Egypt is the only Arab country that is at peace with Israel.The religion is Islam and about. 92% of the population is Muslim, but Jordan is considered to be one of the most secularized Western and Arab countries.

The main sight is the rock city of Petra which flourished from around 400 BCKr. to about the year 300 ADKr, and on the list of world’s seven new wonders. In the city of Jerash, a visit oldtidsbygningene from the Greco-Roman city of Jerash. For those interested in religion is Mt. Nebo Baptist Site, and the mosaic city of Madaba, interesting destinations. Nature-based experiences exploited especially through desert and mountain hiking, especially in Wadi Rum. A bustling nightlife with night clubs, discos and bars in Amman, Irbid and Aqaba located far north of the Gulf of Aqaba. The annual Distant Heat festival ranks as one of the world’s top 10 raves.

Jordan is classified as a country with “medium human development” by the 2011 Human Development Report.

In 1999 King Hussein died who had ruled the country for 46 years. His son, Abdullah II has a huge task of maintaining stability. A National Agenda that involves long-term political, economic and social changes have not yet been adopted.