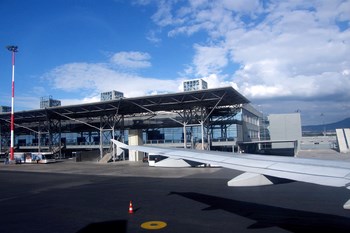 Kalamata International Airport (KLX) is a small airport located on the Peloponnese peninsula in southern Greece – about 7 km northwest of the city center of Kalamata.

The airport is mostly used for charter traffic in the busy tourist season (April to October). In addition, the airlines Aegean Airlines and FlyTorair regular scheduled flights Athens, Thessaloniki and Heraklion ( Crete ).

Kalamata Airport opened in 1959, and started with the charter in 1986. The airport has one terminal building.

Facilities for travelers at the airport is relatively limited, but there are café, newsagent, bank, gift shop and information desk in the terminal.

Transport from the airport into the center of Kalamata is primarily bus or taxi. If you want to rent a car in Kalamata, the international car rental companies Hertz, Europcar and Avis its branches at the airport.